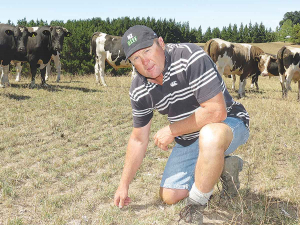 The Waipukurau farmer told Rural News that most of the countryside in the region has turned green – although he notes that some of the hillsides are still brown.

Petersen says Hawkes Bay is now in the state of a ‘green drought’ and with low soil temperatures and frosts near the foothills, meaning pasture growth is very limited.

“Everyone’s fear now is that when we get rain, we get it at a time when it probably all comes at once and that wouldn’t be great.”

Petersen says this drought will rank among the worst the region has suffered and on a par with the 1913 event.

“With droughts we generally talk about limiting it to one season and one financial year. But this is going to span two financial years. That’s where it really hurts when you can’t limit the effects to just one year.”

Petersen says there is no feed in the North Island to buy. He told Rural News that all farmers can do is to wait for the seasons to change. The other issue is having to restock in the spring.

“Many farmers have had to sell stock on a low market but will have to buy on a high one – which adds to the difficulties of recovering from drought.”

He is full of praise for the Rural Support Trust whose work, he says, often goes unrecognised. Petersen says they have done a wonderful job helping farmers impacted by the drought.

Beef+LambNZ’s North Island manager Matt Ward says it could take three or more years for some regions to recover from the drought. He says few farmers have mated hoggets this year, while others have delayed putting the ram out to get ewes in better condition.

“Early reports on scanning rates suggest that in some parts of the country these are down by 30% therefore there will be less lambs hitting the ground in spring,” he says.