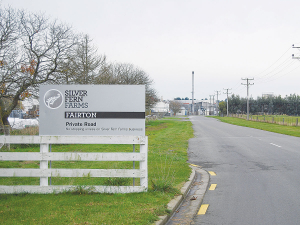 Silver Fern Farms says it is planning to close the pelt processing operation.

Silver Fern Farms (SFF) last week said it is planning to close the pelt processing operation there following a review and staff consultation.

“All the 44 people processing pelts at the Fairton site and four preparing pelts at Pareora have been presented with potential redundancy, as well as with work options at other Silver Fern Farms sites in the region,” the company said in a statement.

SFF closed the Fairton sheepmeat processing plant in May 2017 following a decline in regional sheep numbers.

These factors, coupled with high overhead costs due to the large site, are making pelt processing unsustainable at Fairton, SFF says.

“This will mean the company can consolidate its South Island pelts at its Finegand (Dunedin) pelt preparation facility, bringing efficiency gains through this early part of the pelting process.”

The company also claims it has investigated alternative processing options with others in the industry.

“Should this proposal proceed following consultation, SFF intends to consolidate its volumes through other pelt processors for mutual benefit.”

The company says it is offering support to the 44 people at Fairton and those in four roles at Pareora affected by the proposed closure.

A final decision is expected at the end of August.