Farmers have heads in sand - Labour 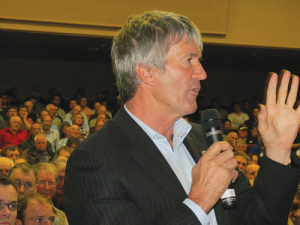 If agricultural organisations like HortNZ or IrrigationNZ “are smart they will show leadership on this issue; if they are dumb, they won’t”, he told Rural News.

O’Connor says user-pays, as a principle, has long been acceptable to farmers, but the water issue has been largely ignored for a long time.

“A royalty on water would effectively provide funding for storage where it is viable, and for irrigation, better monitoring, research and development and better monitoring of regulations and standards,” O’Connor claims.

“If we don’t do this properly our customers will be rejecting our product. We have to produce the finest, most ethically and sustainably produced products in the world and get a premium for them otherwise our future is not too bright.”

He says a ‘royalty’ would be applied to all commercial use of water except that coming via reticulated supply. However urban and industrial clean-up of waterways are “just as necessary and need to be proceeded with”.

Urban people would also pay for water clean-ups of sewage and stormwater systems, but through a different mechanism, he says.

O’Connor also claims that Labour, in Opposition, has not had the resources required to analyse the details sufficiently and properly. He says this is why it is waiting – pending the resources of Government – to establish the finer details of any proposal.

He says if Labour was forced into the detail now it may not be accurate and fair.

“We want to be accurate and fair so that what we implement is workable and people can see it is logical.”