Farmers warned not to overload quads 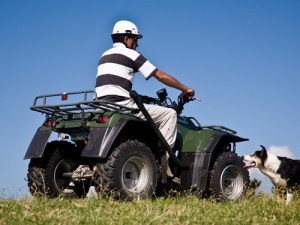 Farmers are being urged to keep themselves and staff safe when doing routine jobs with vehicles.

Farmers are being urged to keep themselves and staff safe when doing routine jobs with vehicles after a farm employee was crushed under a quad while travelling on sloping terrain with a spray tank fitted to the front of the vehicle.

The incident occurred on December 8, 2015 on a farm near Waipukurau.

The Hastings District Court has found that Kiloran Land Company Ltd failed to put a risk management system in place that systematically identified and communicated the risks of the sloping terrain when riding a quad on it, failed to ensure the spray unit was correctly mounted as per manufacturer’s instruction, and failed to implement an effective Working Alone policy.

The farm employee was well known in the farm community and had worked in farming his whole life. His death in 2015 was one of 19 on farms last year - 16 of those involved vehicles. In over 50% of farm incidents last year, farmers were aged over 55 and driving vehicles on sloping or uneven ground.

“Our examination of farm vehicle fatalities from the last three years has found that often the driver had set out to do a fairly routine task like spraying,” says Keith Stewart, WorkSafe’s chief inspector.

“Slopes and tracks with steep drop-offs need to be identified in a risk management plan and properly communicated – or made ‘no go’ areas. Spray tanks must be mounted according to manufacturer’s recommendations and quads must not be overloaded as this increases the risk of overturning.”

Farmers, both employers and employees, are more likely to be working alone at busy times, so having a plan in place for lone workers meant if anything went wrong, the alarm could be raised.

“There are a number of solutions that can be used by farmers and their staff when working alone in remote areas. One of these is to have a plan in place where people check in at agreed times. If they don’t, then check on them,” says Stewart.

Kiloran Land Company Ltd was sentenced under sections 6 and 50 (1)(a) of the Health and Safety in Employment Act for failing to take all practicable steps to ensure the safety of an employee while at work. The charge carries a maximum fine of $250,000. This incident occurred before the introduction of the Health and Safety at Work Act on 4 April 2016.

Kiloran Land Company Ltd was fined $40,000 and ordered to pay reparation of $90,000 in the Hastings District Court.

For more information on staying healthy and safe on farm, go to www.saferfarms.org.nz