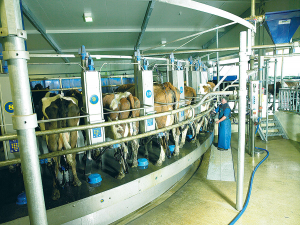 Dairy farmers are expected to continue to milk as long as they can to capitalise on a record milk price this season.

Fonterra chief executive Miles Hurrell says farmers around the globe are facing inflationary pressures and NZ is no exception.

"But I don't think there will be any adverse reaction to milk production," says Hurrell.

Hurrell points out that the co-operative's milk supply is down around 3% on this time last season.

However, improving weather conditions and forecast milk collections for the balance of this season are generally on par with last season.

McGiven believes farmers will instead be keeping a close eye on the weather. "If it gets too dry over summer, farmers will continue to monitor rising feed input costs, along with cow condition to determing what will be their cut-off pint for milking," he told Rural News.

"Most I think will continue to milk for as long as possible to capitalise on the payout."

While feed, fertiliser and fuel prices are rising, McGiven believes the biggest concern for farmers will be the rebound in interest rates.

“That may have a significant impact on some farm’s profitability.

“Inflation is the profit stealer from any business and we are seeing this also on most products and inputs, from diesel and petrol through to wages and fertilisers.

“At the moment we are lucky to have a good forecast milk price to buffer us from most of these impacts.

“I am trying to pay down as much debt as possible, also being well aware that we will have another potentially large tax bill looming in the next financial year that we also need to budget for, so I am certainly hoping that these type of milk prices can be sustainable in the short to medium term.”

Global demand for dairy remains strong and Fonterra thinks that will remain the case for the short to medium term.

At the same, the cloud of Covid-19 and new emerging variants cast a shadow over global trade.

Hurrell says the co-op is working hard to deliver for farmers, unit holders and customers and supporting employees.

“The resilience of our people and our supply chain means we continue to stay on top of the strong demand for our New Zealand milk,” he says.

“However, it is concerning to hear about new variants, which are potentially more resistant to vaccines. There is also the ongoing question of whether economies can rebound from the pandemic and then sustain their financial health.”

Hurrell says that explains why the co-op has a 60-cent range on its forecast farmgate milk price range.