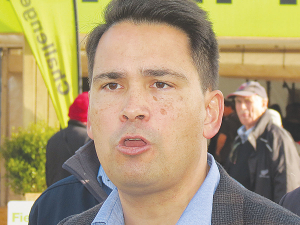 National Party leader Simon Bridges explains his party's view on farming and where the Coalition Government is failing.

OPINION: Our reputation as a producer of quality agricultural products is well known around the world and the sector contributes close to $48 billion in export revenue to our economy. The primary sector provides an economic shot in the arm to New Zealand, and we want to see it continue to grow.

If there’s one thing I’ve picked up from the many farmers I’ve spoken to over the past couple of years, it’s that they want certainty. Farmers and growers already have enough variables to deal with such as the weather, interest rates, disease and international markets. There needs to be a clearly sign-posted direction of travel from the Government that allows everyone to get on board without adverse effects.

The Government has completely failed on this front. Their freshwater proposals were rolled out with a serious lack of concrete data and they’re yet to really address the many questions that farmers have on how they will affect their bottom line. At the end of 2019, it was revealed that Damien O’Connor hadn’t even bothered to ask his officials for advice on this important metric.

Another big concern is the consistent gobbling up of good pastoral farmland to be planted in trees. It’s important to point out that there is nothing wrong with planting trees, but there is a serious issue with how the Government has been going about it.

The perfect storm of rising carbon prices, loosening of the Overseas Investment Act and the Government’s billion trees target has led to this and there needs to be a serious re-think to the approach. The focus needs to be on planting the right tree in the right place, and personally I think farmers are the best judges of where trees should be planted on their land.

Water storage is another important area where more needs to be done. As I write this Northland is nearing drought. National helped get the Waimea Dam built and it should be seen as a shining example of water storage done right, with positive impacts environmentally, economically and socially. National recognises water’s role as one of our key strategic assets going forward, and has proposed the establishment of a Water Infrastructure Fund in our Primary Sector Discussion Document.

NZ First tries to position itself as the saviour of the regions, but the reality is that they were sitting around the table when the Government made all these anti-farming decisions. Last election, they promised to carpet all new Government buildings and state houses with wool, but that promise, alongside many others, was forgotten the moment they knew they could settle back into the Beehive.

The core difference between Labour and National when it comes to agriculture is that while Labour wants to affect change through applying restrictions on farmers like the freshwater proposals and propositions for a water tax, fertiliser tax, nitrogen tax and capital gains tax, National is committed to helping farmers develop the tools to farm their way to better outcomes. We’ll be highlighting exactly how we will do this later this year when we release our primary sector election policy.

Farming has always been a hugely important part of New Zealand’s culture and economy, and while the Coalition Government might see it as a sunset industry, National is committed to helping it prosper.