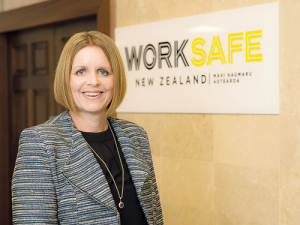 Agriculture is the industry with the highest number of workplace fatalities – about 124 deaths since 2011, says WorkSafe chief executive Nicole Rosie.

In contrast, construction had 35 deaths in the same period and forestry 33, based on provisional figures for 2017; final numbers will be out soon.

“Agriculture is not as dangerous per exposure as forestry but it has a lot more people working in it. It is much, much higher than other sectors comparatively,” Rosie told Rural News.

Rosie notes that three further quad deaths over the holiday were not work related: two people who died on a farm were on a weekend possum hunting trip and one person was killed on a beach.

WorkSafe will this year retain its focus on vehicle related safety and onfarm injuries, but with more emphasis on health related issues.

“There are not hundreds of things that kill farmers – only a few things,” she says. “80% of the acute deaths result from vehicle/people interactions. Quad bikes make up about half of that 80%.

“The other half are tractors and interactions such as loading and unloading and baling. So when people are involved with machinery on their farms they account for 80% of acute deaths.”

The next-highest cause of death is falling from heights; and a much smaller number of fatalities are caused by drowning, interactions with animals, etc.

Back injuries from shearing are significant in the sheep and beef sector.

“One of the biggest causes of serious breaks is ankle injuries. That is a key focus of our agricultural programme.”

WorkSafe has a work stream looking at vehicles – quads and tractors -- and farmers’ use of vehicles; a design project looking at arm injuries in milking sheds; and another looking at ankle injuries -- mostly focused on improving footwear.

Farmers make up a good proportion of the 50-60 acute workplace deaths WorkSafe deals with each year.

But the bigger cause of death – in the range 600-900 – is health exposures, of which cancer is a standout, says Rosie.

“The major causes of cancer are asbestosis, silicosis (from cutting of concrete) and the third highest is... exposure to agricultural chemicals.

“It is very hard to quantify because people get breast or lung or prostate cancer; they might have worked in the agricultural sector for a long time, but it is not common for GPs to think of that as a potential cause of a cancer.”

She says much of WorkSafe’s hazardous substance work is focused on farms.

WorkSafe will look closer at that because it is a key cause of harm in the agricultural sector.

Be safe on the farm this summer

Summer is a busy time on the farm, but it’s also among the most hazardous periods for accidents, says WorkSafe NZ