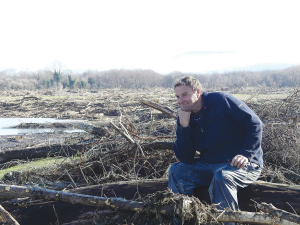 Ashburton Forks farmer and Fed Farmers national board member Chris Allen was one of the many Mid Canterbury farmers affected by the May floods leaving much of his property covered in silt and debris.

Mid-Canterbury Federated Farmers president David Clark was reacting to criticism by National’s Selwyn MP Nicola Grigg. She says the criteria for grants from a $4 million flood relief fund are far too strict and has called for Agriculture Minister Damien O’Connor to review these.

Four months on, she says the Government has “fallen well short of the promises it made to local farmers – completely leaving them in the lurch”.

O’Connor, however, has replied that the criteria and the membership of an independent panel charged with considering grant applications were drawn up in conjunction with industry groups.

He has accused Grigg of cheap political point scoring by choosing to ignore the role that key sector groups, including Federated Farmers, Beef + Lamb New Zealand, DairyNZ, and the Deer Industry Association, played in setting up the fund and its criteria.

“Ms Grigg’s criticism does a disservice to those groups who worked hard to establish the fund.”

O’Connor claims the independent panel considering grant applications was selected with the help of sector groups and local mayors, and consists of William Rolleston, John Van Polanen, Wayne Allan, Winton Dalley, and Elle Archer. As of September 20th, 109 applicants had received grants totalling $2,135,940, and 24 grants were still being assessed.

“Thirty five applications have been declined, and I’m sure the panel considered them very closely,” O’Connor says.

The fund was specifically set up to help farmers clear silt, shingle and other debris that escaped from local riverbeds and encroached onto private farmland.

Clark says the May flood was much larger than flood protection works on the region’s rivers were designed to hold. He adds that the situation was “peculiar” in that the natural build-up of shingle in the alluvial rivers hadn’t been well managed, so the river beds were full of excess shingle that spewed out onto individual farms.

“Effectively it was a failure of a community asset, causing a problem on private land, and that was the basis for the fund.”

Clark claims there’s no situation in recent New Zealand history, where central government has funded the repair of private land-based assets on private land damaged in a weather event.

“The task that we, as the local Federated Farmers leadership, had was to try and get some funding out of central government for the repair of this damage, when there wasn’t an obvious precedent,” he explains. “Central government doesn’t want to set a precedent for being the insurer of last resort of private assets.”

Grigg says that MPI had received 168 applications for support, with a total monetary value of $8,029,535.

“To put the number of applications into perspective there are over 550 properties in the ArcGIS survey database, suffering varying degrees of damage.”

The criteria requires 51% of a property’s income to be from primary industry, which excluded 75 lifestyle blocks as well as a number of farms with other income streams such as tourism, off-farm employment or rental revenue.

“In my view, that absolutely stinks. The Government set a criteria that was very difficult for highly-stressed, overworked and exhausted farmers to meet. I have asked Damien O’Connor if he’s prepared to review the criteria and the answer was a flat-out ‘no’,” Grigg claims.

“While MPI have accepted 82 applications, they’re only paying out $1,482,964 to those farmers – and have declined another 38, on the grounds they don’t meet the eligibility criteria.</p.

“And therein lies the problem – the eligibility criteria is far too strict.”

Grigg said she still stood by her call for a review.

“I reiterate my call – and this is based on feedback from people on the ground – the criteria is too tight for people to be able to successfully secure some funding.”

David Clark says the fund is working exactly as designed, with some applications granted, some still being reviewed, and some declined because they didn’t meet the criteria.

He adds that because the fund is not fully allocated there is now the opportunity for people to reapply under a broader set of criteria, to help with the repair of other uninsurable land-based assets such as culverts, irrigation dams and stock tracks.

“From a Federated Farmers point of view, we want to hear from anybody that has had their claim declined or scaled back, that met the criteria,” Clark told Rural News.

“We really want to hear from those people because we’ll be very disappointed if applications have been scaled back that met the criteria – because the Prime Minister did say, very clearly, that there would be more funding considered if the scale of the problem was bigger than the $4 million dollar fund.”