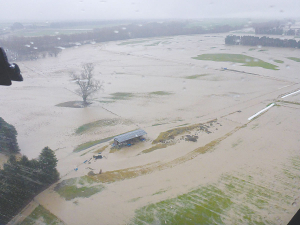 Vulnerability of the roads has become a major concern over a week into the clean-up following the Mid Canterbury's damaging floods. Photo Credit: ECan.

Many road closures were still in force several days after the event.

"Delivering grain to the feed mill for us has gone from being a 30km trip to an 80km trip each way," Clark told Rural News.

"We've got the [State Highway 1] Ashburton River bridge severely damaged and the slumping arguably is continuing to get worse," he adds.

"Heavy traffic is being diverted around Highway 72, the scenic route around the foothills, and that's steadily falling apart with the increased heavy traffic flow on it. And Thompson's Track's not fixed yet. These things are all a priority for our communities."

Clark runs a mixed farm on the south side of the south branch of the Ashburton River. At least two other streams - fed from areas that recorded the highest rainfalls - join the river nearby, making it an early flashpoint for the flooding.

Three washouts have cut Thompson's Track, a major link between the Mt Somers/Mayfield district and State Highway One at Rakaia.

Clark was himself called out to help rescue people from one of two vehicles which became stranded trying to get through the washouts. But Clark says he was lucky not to have "an active river running through the farm".

"We're very, very wet. We've got poor utilisation of feed and all the other dramas that go with that, but we haven't actually got on-farm damage thank goodness."

Some farmers have significant damage and face a long road to recovery, he said.

"And we've got severe damage to the river protection works in the Ashburton River. We need to ensure that ther is a mechnism for that work to get done with urgency," he told Rural News. "The council's been collecting river rates for fully-maintained river berm system, so that work needs to be done by the regional council urgently.

"Farmers can't begin to recover if they've still got active rivers running through the property. Or at risk, in the next rainfall event, of the river getting back in again."

While the rain may be said to have broken the drought, it has come too late to help with pasture growth.

"What it has done, at least, it'll bring the ground water levels up, and that's a positive," Clark explains. "I guess it will help the soil moisture levels going into the spring. But for the here and now, the problem is it's actually made the feed situation worse.

"It's the first week of June. We've got a lot of winter ahead of us and we all knew that we were going to get tight already."