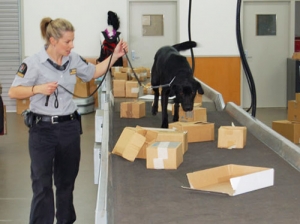 The extra $27 million in the 2015 Budget to fund more detector dogs, x-ray machines and inspectors.

"A growing number of industries have now signed up to work together with the Government through the GIA."

Associate Minister Jo Goodhew says MPI has worked with the forestry sector in biosecurity surveillance for over 50 years, looking out for potential forestry pests that can cause serious disease to trees and threaten the forestry industry. This government-industry relationship will be further enhanced under GIA,

"Forestry is New Zealand's third largest export earner behind dairy and meat, earning around $4.6 billion in exports. Protection from unwanted pests and diseases is very important to this major industry."

Guys says biosecurity is his main priority as MPI minister, as shown in the extra $27 million in the 2015 Budget to fund more detector dogs, x-ray machines and inspectors.

"We also have the new passenger levy, which will mean increasing passenger numbers will fund services at the border from next year onwards," says Guy.

"Biosecurity is a shared responsibility and we need the input of industry and the wider public to make the system as effective as possible."