Get on with it, Fonterra — banker 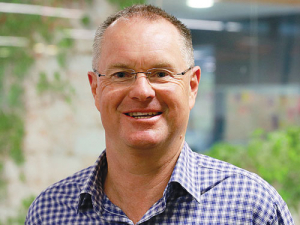 A banker has warned Fonterra to keep its navel gazing to a minimum.

Westpac’s Andrew Hill concedes while it’s probably right that the NZ dairy giant has signalled it’s taking a pause to sort itself out, he believes this must be done in a matter of months not years.

Hill says the latest hiccup with Fonterra is adding to the uncertainty building in the dairy sector for more than a year. Now this is showing in farmers’ attitudes, as borne out by feedback he hears from the regions.

Some problems are not of Fonterra’s making, but some are.

“Fonterra must communicate as much as, and as fast as, it can to keep shareholders onside.”

Recent news from Fonterra about its finances and the appointment of an interim chief executive is another piece of the puzzle of uncertainty. It’s taking time to clarify the agenda on climate change and the environment, regulation and other stuff.

“Then there’s the international picture with what’s going on between the US, China and Iran and the uncertainty that’s causing for world trade which flows directly to commodity markets,” Hill told Rural News.

“The drop in the value of the NZ$ is the one positive that’s provided a bit of a safety net.”

Hill acknowledges the move by Fonterra to pay a small dividend and pay less to farmers in the farmgate price will hit sharemilkers harder than other farmers – because they do not hold Fonterra shares. This risk was well known at the time when the co-op restructured its finances with TAF (trading among farmers).

Hill explains that was always going to be the risk that, at some point, Fonterra would face the trade-off between maintaining the capital to be raised in the unit market and maintaining the profitability of farmer shareholders – the ones most directly affected.

“Fonterra went to the market and attracted capital from people who might not have had the opportunity to invest in this industry,” he adds. “Now arguably they are not able to pay them returns that might have been expected for the risks they were taking in their investment – again another piece of uncertainty.”

Hill believes suggestions that Fonterra should split its business in two – with one focusing on high-value brands and the other on the ingredients side – is something that needs to be explored more.

Some benefits may come from splitting the business, but he’s not sure whether the Fonterra board is looking at this option.

DIRA is another issue which Andrew Hill says is adding to the uncertainty in the dairy sector.

He says there is a good argument to say that Fonterra shouldn’t be the processor of last resort.

“I understand their frustration with the current regulations today and why they (Fonterra) want those changed,” Hill told Rural News.

“The Fonterra board needs to sort out the issues and be prepared to come back with something that’s clear and compelling and – if need be – fight their case with government around DIRA.”

He says these things have to be sorted otherwise the risks will only grow.

Hill believes that if the international events continue to go the way they seem to be going with world trade – and especially the rules being wobbly – then Fonterra needs to ensure it’s dealt with these local issues.

“So it’s not exposed to what’s happening externally otherwise they could be in quite a cleft stick,” he says.