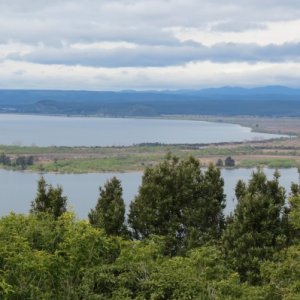 Farmers were among those thanked for their part in helping reduce nitrogen levels at Lake Taupo.

Solid progress has been made on protecting Lake Taupō's future water quality from the effects of nitrogen discharges, Waikato Regional Council's resource use and environmental monitoring committee has heard.

The council aims to reduce by 20% the nitrogen getting into the lake from sources, such as leaching from farms and discharges from wastewater plants. It wants to slow algae growth which can affect water clarity in the lake, a major tourism drawcard.

While lake water quality now excellent, the predicted nitrogen loads in future mean there will be deterioration in its health over time. But measures for the Taupō catchment being implemented now have the long-term goal of making sure that deterioration is addressed and that water quality in 2080 is as good as it is today.

The committee has received a series of reports on the implementation of policy measures with the highlights including:

• All 116 farms within the Taupō catchment needing to have a nitrogen discharge allowance (NDA) established have now been benchmarked. These NDA benchmarks establish a maximum amount of nitrogen that can be leached to the lake from the farms, which cover nearly 67,000ha.

• As the policy allows, trading and leasing of parts or all of NDAs in the catchment has been active. Most trading has occurred between landowners and the Lake Taupō Protection Trust set up to help implement the new policy – the trust is overseen by the Government, Ngati Tuwharetoa, Waikato Regional Council and Taupō District Council.

• The trust's activities have reduced the total amount of nitrogen from farms getting to the lake by 139 tonnes a year, a significant way towards the reduction target of 183 tonnes by 2020. The trading has also seen 5800ha of farmland converted to plantation forestry.

• Since 2007 about 30% of nitrogen from wastewater systems that was getting into the lake has been removed by Taupō District Council's upgrade of the Turangi wastewater treatment plant and other plants upgrades. This year, the district council has committed a further $1.3 million to improvements.

After the meeting, committee chair Lois Livingston said the positive progress being made to help address the future water quality in Lake Taupō was a credit to all involved.

"The regional council's partners in the project - central Government, Ngati Tuwharetoa and Taupō District Council - have played a very crucial role, as have the many farmers who have cooperated fully with the benchmarking process.

"Our challenge now is to make the final strides towards achieving our nitrogen reduction target by 2020. The regional council is committed to working closely with all parties to meet this goal."