‘Gran’ shows how it is done 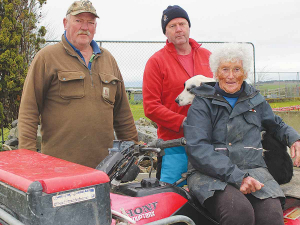 Suzanne Giesen with her boys Robbie (left) and Hamish who are called in to help out on the farm.

It was hard for Suzanne Giesen when her husband John died. She was just 32, had five children aged from 1 to 11 and had a farm to run. More than 50 years later she is still living and working on the farm.

“When John died, my father-in-law said I should go into town. I have never lived in town and I wanted to stay on the farm,” Suzanne Giesen told Rural News.

The Giesens had leased the farm for 10 years, with the right to buy. When John was around, they set about improving the property.

“There was gorse in almost every paddock. I don’t think there was a stock proof fence on the place. The gorse was so thick you couldn’t walk through some paddocks.”

They lived in a two bedroom house on the property. There was a caravan and an old army hut which some of the children slept in.

“We went to what was then State Advances to see if we could build on to the cottage. They said no, but we should build a new house. We bought a mill cheap as the guy was retiring, and we built most of the house from macrocarpa milled from the farm. The house cost $14,000.”

When it came time to buy the property the owners wanted to set a new price to take account of all the improvements John and Suzanne had made. But the farm price had been set 10 years before. They bought the farm. One year into buying it John was electrocuted on the property while saving his son Robbie.

His death was a big shock to the older children and Suzanne.

It was tough with five little kids so Suzanne leased out half the farm so she could be at home with the children.

“They didn’t miss out. We did things we could often do on the farm. No going out. Pony club, polo cross, tennis, and there was skiing.”

When John died the mortgage payments fell to Suzanne. And she was up to the job.

“I worked in the shearing sheds as a rousie just to keep the wolf from the door.”

And there was farm work to be done.

“It came from unexpected quarters, for instance someone would just arrive with a load of wood and ask where I wanted it unloaded.”

The kindness of people helped a great deal.

Suzanne’s son Hamish says that when they were young his mother used to leave him reading while she went to do things on the farm.

“I would be there sometimes for eight hours, just reading,” he laughs.

All five children went to boarding schools -- some to Woodford House, some to Wanganui Collegiate and one to Feilding High School to do agriculture.

“Scholarships were a great thing and meant they could go to such schools,” said Suzanne.

They all came home to the farm during holidays.

Fast forward to today. Suzanne is 84 now and still working and living on the property.

She says her family has been wonderful and she couldn’t have farmed without the help of her two grown sons who live nearby.

Hamish lives just out of Halcombe in Manawatu and Robbie lives in Halcombe.

Robbie and his wife Sandra have the tavern in Halcombe, a small Manawatu town a few kilometres north-west of Feilding.

But Robbie says most of the work is in the evening, so in the day he also drives a truck for local pig farmer Neil Managh.

Hamish works as a trainer for Fonterra.

While Suzanne rides her quad (side saddle) around her lambing ewes twice a day, the sons help with the docking, drenching and weighing stock Until recently Suzanne was doing the dagging, but now she leaves that to the ‘boys’.

“I don’t go around the lambing ewes if it is pouring. It just disturbs the ewes and lambs,” she said.

Two farm dogs on her farm belong to her and she looks after two of Robbie’s dogs. And there are pet lambs, one an orphan which had to be mothered onto a ewe.

It is all in a day’s work for the plucky octogenarian.

Suzanne was the first person in Manawatu to rear bull calves.

“The calves were kept on the cows for four days until I could pick them up. They had a really good start. I didn’t know about scales then. But they were very healthy.”

She built calf sheds (which are now implement sheds) and a new woolshed with a shower and kitchen.

The one thing Suzanne doesn’t like doing much now is driving the tractor, which she leaves to the ‘boys’.

Robbie says his mother still does all the farm finances and makes all the decisions.

“She doesn’t like doing the finances but she does them. “

And health and safety is a newish thing to Suzanne.

She says the farm only supports her. It is not big enough to cope with a family.

“In the pub everyone knows her as Gran. She has 13 grandchildren and eight great grandchildren,” said Robbie.

The farm is now freehold after all the hard yards Suzanne has done. And although she is 84 she has no plans to leave the property.

Any change might mean she leaves the farm and loses her health.

They are discussing how to manage the property when Suzanne retires.

This coming year she will take on dairy grazers again. The owners weigh and drench the animals. Suzanne says it is easy for her. She just opens gates to make sure the young dairy cattle are well fed.

The ‘boys’ want her to cut her ewe numbers back so there is less for her to worry about.

But Suzanne Giesen loves the farm she has worked so hard for.