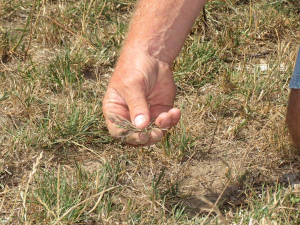 Hawke’s Bay farmers are disappointed no leeway is being given over a resource consent deadline.

Following severe drought, Hawke’s Bay farmers are disappointed no leeway is being given over an imminent resource consent deadline.

Federated Farmers says it has been trying to help Tukituki farmers dealing with the drought, a severe feed shortage and the COVID-19 lockdown.

The end of May deadline for consents to continue to farm under the Tukituki catchment plan is adding considerably to the stress, says Feds Hawke’s Bay vice-president and Tukituki farmer, Matt Wade.

"Lockdown has made it impossible for farmers to put together fit-for-purpose consents for something as complex and individual as their whole farm," says Wade.

To try and relieve some of the pressure, Federated Farmers and Hawke’s Bay Regional Council together wrote to Environment Minister David Parker asking for an extension of the consent deadline.

The letter asked the Minister to invoke his emergency powers to defer the deadline by 12 months because of the pandemic and National State of Emergency.

But Parker replied saying that he did not consider his powers under existing legislation would be able to adequately address, in a timely manner, the deadline issues.

"The Government has seen fit to delay proposals in the national Essential Freshwater package, recognising that dealing with COVID-19 issues and getting the economy ticking over again is the priority - and we thank them sincerely for that.

"But why can’t a similar stance be taken with issues in the Tukituki catchment? We’re only asking for extra time, not cancellation," he says.

Federated Farmers has also written to the Hawke’s Bay Regional Council to ask that the drought does not skew farmers’ individual nitrogen profiles and allowances when they seek resource consent. The additional concern is around this year’s drought tipping the balance of the four-year rolling averages of nitrogen.

"Most sheep and beef farmers have destocked drastically to cope with the drought, which will result in a much lower N profile than normal.

"If these farmers are given consent based on their abnormal N average, they could find themselves with a much lower allowance than they need for their normal farming," says Wade.

He says this is compounded by the fact that many of these farmers are already operating under their individual farm N limits.

Farmers who keep their livestock but are buying in supplementary feed could find their nitrogen result skewed in the opposite direction.

Either way, he says these farmers are doing their best for the welfare of their livestock and shouldn’t be penalized with an outlier N profile for the recent exceptional drought.

The council has not yet replied to Federated Farmers’ letter.