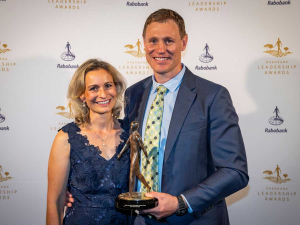 Mat Hocken with wife Lana after receiving his award in Auckland last night.

Hocken is director and owner of family business Grassmere Dairy, a 1000-cow dairy operation on the banks of the Oroua River in the Manawatu.

He becomes the first Kiwi to win the award since its introduction in 2013. The awards ceremony was held in Auckland last night.

Hocken returned to the family farming business in 2013, successfully growing the enterprise and making his mark as an industry leader both locally and nationally.

A former New Zealand age-grade rugby representative, who also played for the Belgian national team, Hocken spent 11 years overseas completing an MA in Political Science and Government at Cambridge University in the United Kingdom and working in government and industry consultancy roles in Belgium and Australia.

Presenting the award, Rabobank Australia and NZ managing director Peter Knoblanche said Hocken was “one of those exceptional emerging leaders who has the combination of business, technical, interpersonal and entrepreneurial skills, as well as academic and sporting success.”

“It is the complete package that makes him stand out,” he said.

“After returning from overseas, Mat joined Grassmere Dairy during a period of tough economic conditions and, with the support of his wife Jana and family, has successfully navigated succession challenges and implemented lean business management into the operation.

Hocken had also made a significant contribution to his rural community in the Manawatu and nationally in a number of leadership roles.

He is the joint-founder and chairman of the Rural Innovation Lab, an advisory board member of Massey University Business School and a director of MyFarm investment syndicates in the apple and kiwifruit sectors. In addition he has held positions as dairy chairman of Federated Farmers Manawatu-Rangitikei, and as associate director of the New Zealand Rural Leadership Trust.

A Nuffield scholar in 2017, studying innovation in agriculture, Hocken is also a regular speaker at national and international industry conferences and events, including the Global Dairy Farmers Congress in Germany in 2018.

Accepting the award, Hocken paid tribute to his family, his on-farm team and the key people who had influenced his career.

“I’m very fortunate to have a supportive family network and a great team on farm and this has enabled me to pursue a number of off-farm projects,” he said.

“I’m also lucky to have to worked with a number of great people throughout my career both overseas and here in New Zealand. I have really valued the help from supportive local farmers through my involvement with Federated Farmers, while the Nuffield network has helped guide, inspire and encourage me to take on leadership positions.”