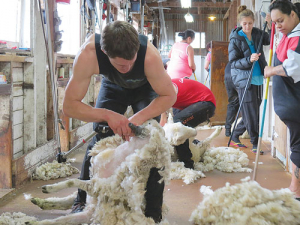 The Shearing Contractors Association is recommending increasing shearing rates by up to 25%.

The shearing industry must move now to stave off the threat of farmers being unable to get their sheep shorn, says Mark Barrowcliffe, president of the NZ Shearing Contractors Association.

The association is recommending its member contractors close the pay gap with Australia by increasing shearers’ pay and entitlements by up to 25%.

He knows farmers will be frustrated by extra costs when wool returns are low. But without skilled staff, costs would soon rise “hugely” anyway, he told Rural News.

Barrowcliffe says a threat looming for NZ farmers is that they may not be able to get their sheep shorn. “But we don’t want it to get to that bad first before everyone realises.”

He says some farmers are already not getting their sheep shorn on time as they used to.

“For animal health [reasons] we don’t want to see farmers unable to get their sheep shorn. We get busy times in December and January across NZ with flystrike issues. We don’t want to be singing the ‘I told you so’ tune then.”

Barrowcliffe says the industry has “huge” difficulty in retaining shearers in NZ and recruiting young people.

“We have become a training ground. You get good, or you learn your trade here – or you used to, because we haven’t got any training now – and then in the really productive years of your life you go seek the high dollar elsewhere,” he says.

“You’ve only got a small window of [high] earnings in our job; you are probably your best in the 25-35 year range. There are people who shear either side of that, but I am generalising.”

While the overseas circuit used to include the northern hemisphere, the high NZ dollar has hammered returns there. To travel north a shearer has to be committed.

“Now the earning power is in Australia with them upping their shearing rates, and being right next door it’s easy to get there. It has become a lot more accessible to NZ shearers,” says Barrowcliffe.

“They have better earning power there and better continuity of work mainly due to the weather conditions. They don’t get as much rain and we need dry sheep to shear,” he adds.

“Certain parts of NZ are well known for their rain, which farmers love and it’s great for farming but not so great for a shearer.”

He says the industry is happy for some of our shearers to go to Australia, but they need to be attracted back for the NZ shearing season.

“You don’t want all your staff staying with you all the time; it’s a seasonal job,” says Barrowcliffe. “You have your core staff who have family commitments or whatever and they don’t want to go anywhere and that’s fair enough.

“You’ve got people who come at those busy times and on the shoulder and you want them to give you a few good, hard months work and then they move off to others parts of NZ or Australia and keep the circuit going.”

But he says they are now travelling to Australia, and though they plan to come back the money is so good they don’t.

Barrowcliffe says the industry is also struggling to recruit because of a national shortage of staff, especially skilled staff.

“There has been no entry-level training for a few years now. And it hasn’t been put out as a career in schools.”

He says young people are not coming into shearing and there’s a high turnover of those who do.

“I don’t think that is just a shearing problem; many industries have that problem. It is not a very good place to be for anyone’s industry.”

The NZ Shearing Contractors Association has recommended that its contractor members adopt new pay and entitlement levels. And it is investigating new ways of training through the Primary ITO. This followed a “couple of failures” to get industry training underway.

Barrowcliffe says they know some costs will be passed on to farmers.

“We know it is a hit for them, but if they want a sustainable shearing industry this is one part of the plan for us to have the staff they desire to help maintain their assets.

“But with a lack of skilled staff I think the costs were going to rise hugely anyway. We have to attract the right people to the industry and pay them well to get those people and keep productivity high.”