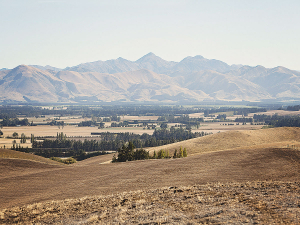 Looking north across the Hawarden Basin from Brandon Downs toward Mt Tekoa, the area potentially to be irrigated by an expansion of the Amuri scheme. Photo: Supplied.

The scheme would take water from a proposed intake on the south bank of the river and distribute it to shareholding farmers through 100km of pipeline.

This is the area where the now defunct Hurunui Water Project would have operated. Having failed last year to garner the required farmer support for its scheme, HWP accepted a takeover offer from Amuri.

Chief executive Andrew Barton says AIC had offered to buy HWP’s water consents but a full takeover proved the easiest and neatest way to acquire them. As of May 31 the two companies have formally amalgamated under the AIC name.

AIC, which already irrigates 28,000ha north of the Hurunui, says the proposed scheme is a smaller alternative to the HWP proposal. The company says it has talked with local farmers and believes a smaller scheme is viable.

AIC says the area has been drought hit over recent years and an irrigation scheme would bring opportunity and certainty to its farmers.

“The offer of shares... is the culmination of a lot of hard work by the community over many years,” AIC chair David Croft says. “In the last year, AIC has taken on the mantle to shape a viable proposal for irrigation and is now pleased to present this opportunity to local farmers.”

He says a smaller scheme also reduces the risk of effects on water quality.

“Farmers will typically irrigate less than half of their farms, making irrigation viable for existing sheep and beef farmers. The resource consents for operating the scheme have strict conditions to mitigate the environmental effects of the proposal.”

AIC says it takes its environmental responsibilities seriously and any new irrigators will be subject to the same stringent requirements as existing shareholders.

“AIC ensures that all its farmers hold farm environment plans (FEPs) and new irrigators will need to use efficient irrigation systems and have FEPs in place prior to getting any water. FEPs specify the on farm actions to meet good management practice.”