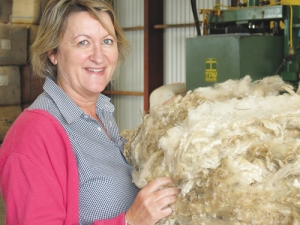 Initiative are underway in New Zealand and overseas to highlight the benefits of wool and to increase its use in buildings and homes.

Hawkes Bay wool broker Philippa Wright, chair of the NZ Campaign for Wool Trust, says a long absence of wool promotion in NZ means it is now ‘off the radar’ of young people. Wool’s story is undersold.

The NZ Campaign for Wool, part of a larger international campaign headed by Prince Charles, is working on three projects to raise awareness of wool.

The first of these, says Wright, is called ‘Wool in Schools’ sponsored by PGG Wrightson. It involves outfitting a shipping container with various interactive projects that will enable young people (11-12) to “discover” wool.

“We want them to be a part of wool, be excited about it and go home, tell their parents about it and spread the word that way. We need the younger generation to be inspired by wool,” Wright told Rural News. “We are trying to teach them the history of wool because there is a real heritage of wool in NZ. Some of us were wrapped in wool as babies. We were all told to have a wool blanket at the bottom of the bed because it was the first thing you grabbed and wrapped around you if there was a fire.

“We all had wool carpets because we knew that it kept us warm.  You still hear people say, ‘I have to get my woollies on’ – so it’s still part of our language.”

Wright says they want the young kids into discover wool and make them feel excited and proud about it. She hopes, in time, they will look at labels and make sure a product is wool. This will just be a pilot project, which will be trialed in four North Island schools. But if it is successful, it will be extended to others over time.

The other project the Campaign for Wool is hoping to run – if they get a sponsor – is called a ‘weekend in a woolshed’. This is being run by Wellington architect and wool ambassador Stephen McDougall. Wright says they want to get four top, young design students onto a farm for mentoring by leading architects and wool experts.

“They will come to a farm for a whole weekend, be totally immersed in wool and be told about its attributes and what it can do. As a result, the students will be tasked with developing something new to do with wool. The benefit of this is these are the people who create the ideas and the fashion, and all consumers are followers of fashion.”

The final project involves hiring a specialist in the United Sates who will speak to architects in 13 states about the attributes of wool and why they should include it in specifications for buildings and houses.

“It’s to create awareness of why wool is so good. It ticks all the boxes environmentally, sustainably and health wise,” Wright adds. “So it’s an easy sell, but we have to get out there and remind people about that.”