Keep calm and carry on – BLNZ 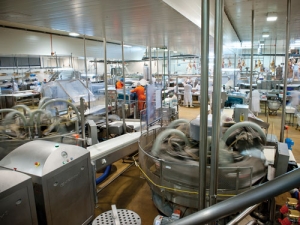 Beef+Lamb NZ agrees that current returns are unsustainable, but is confident about the future of NZ meat.

Beef + Lamb NZ remains confident about the future of the NZ sheep farming sector, but admits there is good reason for current negativity.

He says farmers and BLNZ need to stay focused on what is in their control and work with processor exporters around NZ on country of origin, new products, new markets and matching supply and demand for all cuts of the lamb – including co-products.

"We agree current returns are not sustainable," he adds. "However, we believe there are constraints on ever increasing numbers of dairy conversions."

Figures just released by BLNZ's economic service show that for the December 2015 quarter 223,000 more lambs were killed than in the same period a year earlier.

The average value per tonne declined despite the weaker NZ dollar.

"Demand was particularly strong in the European Union and North Asia, where shipments increased by 24% and 18%, respectively. Strong demand from the European Union led to a slight improvement in the average value (+0.8%) of exports to the region. However, in the case of North Asia, the rise in shipments coincided with a 16% drop in the average value."

Spooner believes this further highlights the economic slowdown and uncertainties in China. He is not optimistic
that China will resume buying at previous levels anytime soon.

However, despite the reduced volumes currently in the Chinese market he says it remains important to the NZ red meat industry's future.

"It is important now and will continue to be so. China is the second largest market by volume," Spooner explains.

"The current issues are its large volumes of imports from 2013 to 2014 and increased Chinese domestic lamb production as higher cost lamb producers exit. Both have been impacted by falling demand with slowing economic growth."

BLNZ believes 2016 will be slow, but in the medium term it expects the Chinese market to bounce back.

"China is a huge market, very diverse and it prefers pork," Spooner adds. "It is competitive, but NZ has a unique proposition."

Meanwhile, he says farmers are not seeing better lamb prices for reasons not within the control of farmers or meat companies.

"We are seeing demand and supply imbalances, as well as the disruption to international lamb markets due to economic and political issues," Spooner explains. "The low Euro and high GBP have reduced UK lamb exports. Also, Spanish exports to Syria have been disrupted and are now being exported to France, a UK lamb export market."

There has also been increased lamb production in the UK and China which has put pressure on pricing.

Finally, Spooner believes that the proposed ownership changes at SFF are more likely to help than hinder farmer returns.

"I'd expect these to improve returns, as do a large number of SFF shareholders and industry investors," he adds. "All industry investors are aware of the need to develop a viable supply from farm for sheepmeat."