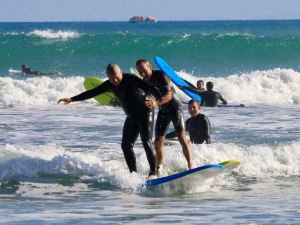 Surfing for Farmers is a joint effort between AgFirst Gisborne and Gisborne Boardriders.

The campaign began in Gisborne in December 2018 and has since expanded to Mount Maunganui, Gore Bay in North Canterbury and Sumner near Christchurch.

Sam Hain, a farmer in the hill country 50km west of Gisborne, began attending the surfing events a year ago thanks to his wife’s encouragement.

Hain now attends every Tuesday evening during the summer and has only positive things to say.

“I absolutely love it, and feel more confident about going out, it’s a great thing to do.”

Surfing for Farmers has received support from a range of sponsors and people — one such supporter is Bayleys real estate agent, Stephen Thomson.

Despite being a surfer of “average” ability, Thomson says he felt compelled to get involved in Surfing for Farmers after spending time as a farm consultant in the Gisborne region.

“I was very much dealing day to day with farmers who were experiencing the stress and demands that their business brings,” says Thomson.

“Seeing the statistics about farmers’ mental health which are not good — it got me fired up to thing there must be something I could do about it.”

Working with Gisborne Boardriders’ Club, Thomson worked to line up coaches, boards and wetsuits for the farmers to use, and some sponsorship support from Bayleys and Ballance Agrinutrients.

“Before I committed to it I put a few feelers out, and knew there were some older farmers out there who had surfed, and maybe lost the passion or time for it.”

He knew if he got a handful of farmers on the first day just over a year ago, he’d be happy.