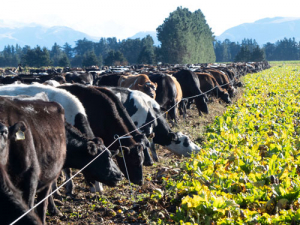 Graeme Coles claims he has developed a product that provides the first real step in practical on-farm greenhouse gas mitigation.

"It has been frustrating to hear the dialogue about climate change dominated by pessimism about how long it is going to take to develop new tools to mitigate agricultural emissions," he told Rural News.

He says the product Knewe-Mg has a prebiotic effect in the rumen of cows, sheep, deer and other grazing animals. He says it helps lesen animal greenhouse gas emissions by cutting nitrogen loss to the environment by 30% and reducing methane output by cutting animal waste per kilogram of milk solids produced.

"The technology does this by improving the performance of the micro-organisms in the rumen, improving the ability of the animal to absorb rumen fermentation products, and as a side benefit, improve the status of the rumen immune system," Coles explains.

He says that science shows that the New Zealand-invented prebiotic increases animal productivity relative to feed intake, enhances animal wellbeing and enables farmers to mitigate both methane and nitrogen emissions.

"It is cheap, safe and easy to use, and the approach is patented, so the benefits can all be brought back to New Zealand," Coles says.

First trials on the product were conducted back in 2008.

"Velvet stags show around 15% increase in yield as well as a reduction in aggression."

Coles adds that research has also shown dramatic decreases in empty cows, incidences of mastitis and of calving problems.

"Theese benefits will show up in at least one extra lactation, which is significant contribution to herd GHG reduction," he adds. "Overall, this leads to a 25% reduction in methane intensity of production."

However, Coles believes the most important benefit from farmers using Knewe-Mg is that it can reduce the loss of nitrogen from their herds to the environment by at least 35%.

"Feeding the prebiotic during milking allows the farmer to reduce feed protein level from 14% to no more than 11% - a 15% saving that almost pays for the product by itself," he claims. "Those reduced losses all show up in reduced emissions of nitrous oxide to an extent that has a better impact than eliminating all methane emissions."

Coles says the product's prebiotic technology data has been evaluated by Fonterra and it will be commercially available for the 2022-23 dairy season.

"Farmers can adopt this technology now, exceed the demands of the climate challenge, and make good money doing so."