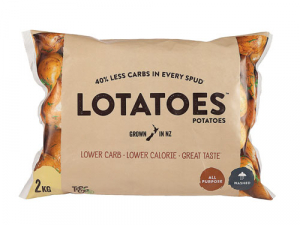 ‘Lotatoes’ are expected to be on the supermarket shelves from late November.

This month, Lotatoes fended off four other food innovators to be crowned overall winner of the Ministry for Primary Industries Primary Sector Products Award at the 2017 New Zealand Food Awards.

The top-notch potato, with 40% less carbs and fewer calories than other potato varieties, was developed by cross-breeding different varieties of potato seeds. Those seeds have a shorter, more sustainable, growth cycle and use less water than other spuds, making them better for the environment.

Balle Brothers’ production manager Eamon Balle says his company has been excited to be involved in growing Lotatoes.

“It took three years to grow the variety and there’s been a lot of learning along the way,” he told Rural News.

Balle and other growers also travelled to Europe to meet growers growing a similar variety.

Balle says Lotatoes were trialled on its farms at Ohakune, central North Island.

Judges at the NZ Food Awards were impressed with the process used to naturally breed and sustainably grow Lotatoes.

“They are sustainably grown here in NZ by passionate farmers loved by kiwi consumers,” he says.

“Having judges recognise Lotatoes confirms we’re on the right track with innovation, which in the produce industry takes a long time, so hats off to the dedicated teams from T&G and our growing partners Balle Brother and Masters Produce for getting Lotatoes from the soil to the supermarket shelves.”