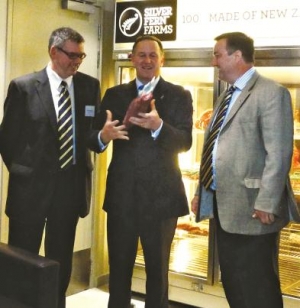 TWO YEARS ago the Te Aroha, Waikato, meat processing plant burned down, a major tragedy for a small town in a productive farming area.

But in a Phoenix-like rise from ashes, two years later almost to the day a state-of-the-art beef processing plant has been opened by Prime Minister John Key.

As Keith Cooper, chief executive of Silver Fern Farms, owners of the plant, explained, "This was the first time our company has had the opportunity to build a new plant from the ground up. So we've... made use of advances in technology to produce the most efficient and productive plant we could."

In the intervening period, SFF had tried to find work for its staff at other plants, meanwhile the grins on the faces of the 380 people who will work at the plant when it reaches full production will be happy men and women.

A tour of the plant showed the modern inputs. Some very large bulls were being processed at the time: as the full carcases swung into view, a quick swipe with an electric saw had the vast array of innards scooped into a moving line of separate trays. These were sorted as they moved along the line, with the offal separated out for different areas of preparation. The carcases were then cut in half longways, for trimming. With health and safety being paramount in this plant, each person on the chain is standing on a grilled platform, which can be smoothly moved up and down to ensure all work is at a comfortable and safe level.

In contrast to earlier visits to older plants, we saw many of the workers were women, whose work is valued for its speed and acre.
In the vast boning room, at least four times the size of the old one, worker productivity is constantly measured. The carcases are weighed as they arrive, and management know how much product is expected from each, based on prices paid to farmers. Every piece cut from the bones is placed on a moving belt and weighed. Inefficient boning or slow progress leads to training or discussion. With a number of new staff, and everyone getting used to new premises and systems, after ten weeks productivity was gauged 65%. They expect in one month to approach the desired 100%.

With product from the plant being packed into boxes on pallets, the lifting and carrying is easier. As the pallets are filled, they move downwards to floor level, so the operators don't have to bend or stretch, but just place them at the same height each time.