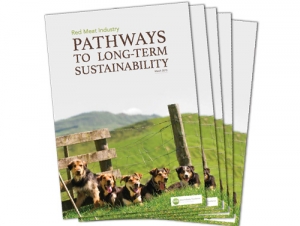 McGaveston says everyone should at least read sections 6 and 7, pages 57 and 58 of the Pathways report.

MIE won't give up on its campaign for consolidation, he says, despite two proposals to BLNZ being dumped by the farmer vote.

McGaveston told Rural News the results weren't a surprise because farmers have switched off from engagement with BLNZ and "a lot of farmers didn't even open their BLNZ envelope". "They are going broke while BLNZ is still focused inside the farmgate."

McGaveston says BLNZ's argument that meat companies are not interested in reform and therefore funding MIE is worthless does not hold water.

"Why would the processing companies lead reform?" he asks. "There is no way, because it means that some of them will lose their positions. Everyone is in patch protection including BLNZ.

"Sitting back waiting for the processors to initiate reform is not going to happen – it's just a dream."

"That's a significant saving. That's not even including the opportunities that exist in the marketing side of it.

"While BLNZ does everything to stop the process, they are doing their levy payers and my fellow farmers a disservice. MIE is not prepared to give up on this opportunity for farmers. But it has to be farmer led and farmers hold the key."

He says perhaps MIE was naïve to think farmers would read the Pathways report and he has also heard from a number of BLNZ councillors and directors that they haven't read it.

He says everyone should at least read sections 6 and 7, pages 57 and 58. (www.meatindustryexcellence.co.nz/mie-report-2015)

"This is not just a Newco (Silver Fern Farms and Alliance amalgamation) proposal; we've got lots of other opportunities out there."

McGaveston says the attacks by BLNZ have turned farmers off. BLNZ spent $750,000 to get the commodity levies approved and 39% of farmers engaged in that vote, of whom 32% supported the continuation of BLNZ.

"Given we spent nothing on this campaign it was pretty obvious we weren't going to win."

McGaveston agrees if the Silver Fern farms sale to Shanghai Maling goes ahead it will put the Newco proposal on the backburner. But that sale doesn't solve industry issues, doesn't rationalise the industry, doesn't remove any excess capacity or deal with the contracted supply issue, he says.

Approval processes, including the Overseas Investment Office, still must be finalised, and the deal has to be completed by June 30.

"But if the SFF deal does reach a snag I believe there will be a totally different environment amongst farmers because those in favour of that... their balloon will be burst," says McGaveston.

"There is a lot to go on in the next few months. If we did what James Parsons said and just buggered off I believe we would do farmers a disservice."