Milk continues to cream it 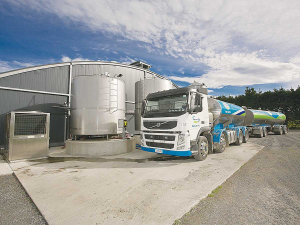 Buoyant dairy prices are raising prospects of another solid milk price next season.

Economists are ruling out two straight seasons of a record farmgate milk price.

Buoyant dairy prices are raising prospects of another solid milk price next season but it's unlikely to top this season's bumper price, they say.

ASB is forecasting a whopping $9.20/kgMS forecast opening price for the 2022-23 season.

"Our opener was actually a little lower, but we revised it up in the aftermath of the invasion of Ukraine," ASB economit Nat Keall told Rural News.

Keall doesn't think the next season will necessarily wind up stronger than the current one.

"But we do expect another very high milk price. Our current forecasts for the 2021-22 and 2022-23 seasons would see the highest and second-highest milk prices on record, respectively."

He expects prices to hold onto all of their gains, and perhaps head higher in the near term.

"Global supply remains tight, and the situation in Ukraine is unlikely to help efforts by overseas producers to boost production, given its likely to disrupt the flow, and raise the 'three f's': fuel, feed and fertiliser."

"We do expect prices to moderate as the year wears on, but a sharp correction looks unlikely at present."

"But where we land is anyone's guess. We're trying to forecast 15 months down the track; it's hard to figure out what will happen in five days," he told Rural News.

BNZ is forecasting an opening milk price of $8.90/kgMS for next season.

"They should be keeping costs under control and hunker down. Continue doing what you are doing.

"It's difficult to say how things will play out."

He says, in previous cycles, prices came down quickly after rising to record levels. With less milk globally, it is hard to predict what happens this time.

Westpac is forecasting an $8.50/kgMS opening forecast for the next season and senior agri economist Nathan Penny expects prices to moderate over the next 12-15 months.

"We still expect prices to moderate over the season as global dairy supply eventually rebounds, nonetheless prices for the season as a whole are likely to average higher than we previously expected," says Penny.