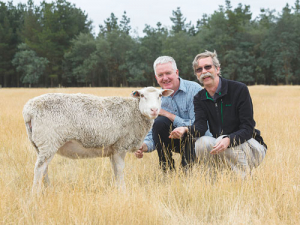 ‘Sharon’ the mutant sheep with scientists: Could she be the answer to wool’s current woes?

Research into mutant sheep with the naturally occurring trait of straight rather than crimped wool may lead to new potential for wool, says AgResearch scientist Jeff Plowman.

The result may be new fibres.

“But we want to get an understanding of what drives wool fibre in the first place – what factors affect it,” Plowman told Rural News.

“We are trying to model wool fibre so we can provide information for farmers about what to look for in wool types for breeding.

“We have other programmes which this could feed into.

“We are doing mathematical modelling to work out what sort of fibre affects prickles and so on.

“We can feed the data into that model eventually to come up with ideas for farmers for breeding.”

The strong wool farmers want to breed wool that doesn’t have prickle problems.

“Merino is a good wool as a garment on your skin, but it is not as strong as say Romney,” he explains. “If you get Romney down a bit more then maybe you could still have that strength, but you could wear it close to your skin. And not have prickle problems.”

Plowman says the objective of their research is trying to keep the wool going, find markets and improve the quality of NZ wool.

“Merino sells well. But with some of cross breeds it is not worth shearing sometimes compared to the carcass weight and prices.

“Farmers aren’t bothering to breed for wool quality, they are breeding for meat. You can’t blame them – you’ve got to go where the money is.

“But there is always potential – we are passionate about trying to improve wool.”

Plowman says they are always keen to hear from farmers who have these mutants. Commonly known as Felting Lustre mutants, these sheep are rare.

The work began in 2011, when a lamb with an unusual coat was brought to the attention of AgResearch staff involved in wool research. They initially thought to be a cross between a sheep and a goat- the coat was reminiscent of an Angora goat. Genetic testing showed it was 100% sheep.

They located more mutants through an appeal to farmers.

“We have found they show a radical change in wool structure and properties that can be tied into specific protein changes.”

Sometimes the mutant sheep switch to become crimpy as they mature.

The curvature and diameter of the wool fibre are important properties in controlling performance in textiles and other products.

The mutant sheep are delicate and not suitable for most New Zealand farms.

“We want to use what we learn to add value to New Zealand’s mainstream sheep flocks. The protein differences between the mutant sheep and semi-lustrous breeds suggest that it may be possible to breed wool with controlled levels of lustre, or crimp, independent of diameter and hence produce new wool products which allow for different market opportunities.”

Plowman says they are looking at the protein composition and comparing that with semi-lustrous breeds.

“There are certain proteins that sort of get lesser in content and these are associated with certain cell types in the fibre,” he says.

In merino for instance there is a definite pattern in the bilateral symmetry between two different cell types. One is always on the outside of the crimp and the other on the inside. That may be a factor because the mutant sheep don’t have that symmetry.

“Why it affects their proteins we don’t know but the idea is to locate the gene. There are several different genes involved in mutation because some of the animals start to revert after about six to eight months; the wool which is straight suddenly goes crimp again.

“There is some sort of control mechanism thing there – whether it is because they have reached puberty or whether it is a dietary thing, we don’t know.

“We think if we understand how it affects it… could we control this thing in others ways, through diet and things like that?”

The mutants’ actual wool itself isn’t good because it felts.

“But if we can find out what the control mechanism is, maybe we can breed for more lustre for example,” he says.

Some of the mutants seem relatively healthy, but others are not and some die at birth.

If there is a hope of getting the wool qualities into a healthy flock he says they have got to find the genetic marker for the next stage of the process. “Then we have got to figure out how it affects the wool process and these ones who revert, how they are affected.

“Once we figure out what the gene is we might be able to modify it or how we can deal with it.

“There are semi-lustrous breeds… so if you can get can get a fine fibre with a sheen to it like angora that can survive outside in the New Zealand climate that would be the thing to go for.”