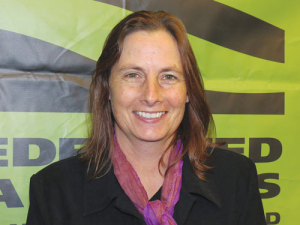 NAIT could be a lot easier to use, she says.

While it works well for recording animals arriving at a processing works, there are apparent breakdowns in compliance when farmers are transferring stock among themselves.

“We all know now there’s a gap and we can do better to make sure that going forward we don’t find ourselves in these situations,” Milne told Rural News.

She says that where NAIT records are incomplete, cattle movements are still able to be traced from farmer records, but it had added time to the response to M. bovis.

“We could’ve been in a different position than where we are right now.”

A Federated Famers technical advisory group including dairy, beef and deer sectors had contributed to a review of NAIT, which will soon go out for wider consultation.

Milne, herself a West Coast dairy farmer, said she had experienced problems with farm management apps not always doing what they are supposed to do, i.e. automatically sync with NAIT so farmers only have to input data once.

The NAIT review is intended to modernise -- going through finding any small discrepancies or faults within systems that might be addressed, she said.

He said NAIT is seen by some farmers as a compliance cost, and some report issues with the registering of stock movements, particularly receiving farmers.

“The NAIT review, soon to put its recommendations out for public consultation, focused on identifying and removing barriers in the system that are stopping people from complying,” Lewis says.

“The recommendations focus on retaining accurate animal location and tracing information while making it easier for NAIT system users to fulfil their obligations, improving design aspects of NAIT, and improving farmer and industry compliance with NAIT obligations.”

Lewis said the whole industry, MPI and OSPRI (the company which runs the NAIT system) all have a role to play in encouraging 100% compliance.

Meanwhile, Milne says how ‘gypsy day’ will go this year in the face of the Mycoplasma bovis outbreak remains “a $64,000 question”.

There is concern in the dairy industry that the traditional June 1 relocation of sharemilker-owned herds will be disrupted by movement restrictions placed on suspect herds, or that the movement of herds with undetected infection will spread the disease.

She says it’s a shame the national milk testing was not begun sooner, but the capacity for all the tests was not available sooner.

“Quite frankly I’m not sure how it’s going to work at this stage. But once we get that extra information on spread from the bulk testing, that will help enlighten everyone on the best way forward.”

However, Milne emphasised that concern was not just about gypsy day.

New Zealand’s dairy farming is quite different from elsewhere, having evolved a lot of off-platform grazing with a lot of stock movements on and off.

“It is unique worldwide and no-one does the sort of shifting around we do. We’ve been lucky because we’re an island nation, but... that luck runs out from time to time because we are vulnerable to an incursion.”