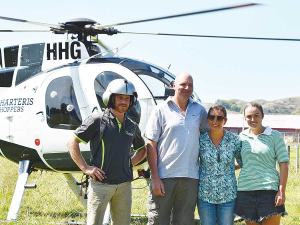 Bart and Nuku Hadfield (centre) with Blake Charteris from Charteris Choppers and Penny Wilson at the 2020 East Coast Farming Expo.

A bit of a dark cloud has turned into a silver lining for Nuku and Bart Hadfield and their wider farming community.

The award-winning farmers Mangaroa Station from the Ruakituri Valley, inland from Wairoa, were looking to do a “bit of a fix-up” on the decades-old airstrip on their 1506ha farm to ensure they got the necessary fertiliser on the ground at the optimum time.

They called on Andrew Hogarth from Farmers Air to have a chat, quickly followed by Gus Thompson from AF Thompson Contracting – specialists in roading and earth moving.

Fast forward and they’ve now got a brand new strip with a partitioned 120-tonne super bin that has already been well-used by neighbours.

With forestry one of the first to be hit by Covid, Thompson had his big gear sitting ready to go in the yard. With lockdown pending, the pressure was on to get things in place.

Stevenson, who previously owned Farmers Air, had flown off the old strip 40 years before, talked with Thompson and instead of a band aid fix, the team ran the strip the other way and future-proofed the farm for next 50 years.

“The neighbours are rapt,” says Hadfield. “Already five have used it and by the end of November 1000 tonnes had been flown off it.

“Having the big bin means the fert is there and ready to go when the weather clears. For any farm, fert is one of your biggest expenses and it can make a hell of a difference if you can’t get it on when you want.”

The entire project took six weeks to complete. There was a lot of earth to be moved for the 500m strip and a slight delay when they had to wait for the bin but once on the property it took just two days to install.

On Thompson’s recommendation, the strip was metalled, making it virtually all-weather. “Normally you wouldn’t be able to get fert on in July and August because the grass strips are too wet but this is more like a road and dries out in half a day,” Hadfield adds. “We are just so rapt with it, especially when we saw our fert going off it in full loads.”

Hogarth says the new-build is perfect for his crew.

“It’s all weather, it complies with best practice, it means we can carry full loads and with two bins we can put two different customers on the strip on one day giving us the capacity to keep fert in front of us,” he says.

A plane can distribute 25-30 tonnes of fert an hour – the equivalent to a truck and trailer unit.

“When you are carting from Wairoa or Gisborne with a two-to-three hour turnaround, you need three on the road. That in itself is challenging but the bin holds four loads.

“Trucks can also deliver fert while the plane comes and goes.”

Hogarth says the Hadfields have made is an investment for them and future generations, “While it wasn’t done for the community good, it is actually serving the community well allowing better productivity all round.”

Other farmers have been by to look at the development and the pilots are also singing its praises, describing it as the best strip they’ve flown.  “They work in a high-risk environment, and we feel better knowing it is safer. It is a win-win for us.”

The Hadfields run 14,000 stock units on the farm, including 6200 Romney ewes and 500 Angus breeding cows, and in 2015 won the Ahuwhenua Trophy for Māori Excellence in Sheep and Beef Farming.