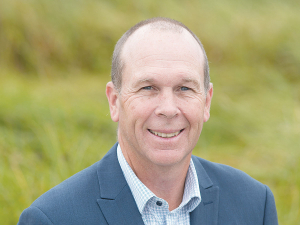 He explains that Covid has been disruptive and now the Ukraine/Russian war is adding to those challenges, with affected shipping schedules and also grain supplies.

Since taking on his role at Pamū earlier this year, Leslie says he's had a chance to meet a lot of people in the office and also around the farms. He's impressed by the dedication and passion of the farm teams. He adds that he probably shouldn't have been surprised at this.

Leslie says they are great teams and, like many farmers, they face the challenges of weather - be that flooding on the East Coast or down south with the drought - and now problems obtaining processing space due to labour shortages in meat plants.

"That's been one of the highlights - the people side of it - and the personal commitment they take in treating those farms like their own. The challenges facing Pamū are no different to other farming operations," Leslie told Rural News.

"Attracting staff, also ensuring the company continues to operate as a profitable business. There are challenges of dealing with climate change or adapting to some of these extreme weather events or water quality and things like that. There is a large amount of change and it's a case of managing that through in a practical sense."

Leslie says one of his objectives is to align more closely Pamū's 51 dairy farms to its beef operation.

He says, apart from the dairy farms breeding replacements for the dairy herds, Pamū is making sure it gets the right genetics for breeding dairy beef which can be integrated into their already significant beef farming operation.

Leslie says they are looking at all options in this regard, including "new generation beef", but also taking animals through to 24-months. He says ther are also looking at how they can integrate forestry into some of their farms to improve the landscape. Leslie believes that some land is in fact better suited to forestry than livestock.

One area that that has taken time for Pamū to develop into good quality pasture has been its land at Wairakei Pastoral, just north of Taupo.

"You can see now the areas that have been grassed for 10-plus years into pasture, versus the ones that have been planted more recently. Over the years, the land has consolidated and the fertility is starting to build up," he explains.

"Equally, we have had a big focus there on summer dry and everybody is asking if we've got our re-grassing and solutions correct for that sort of land.

"Lucerne is part of the whole forage conversation with climate change and there will be some different challenges about what forage species to use."

Leslie knows there is criticism of Pamū’s ventures.

While he acknowledges they have the advantage of scale, he points out the company has to operate profitably.

"We need to acknowledge that many of our farms are on challenging land," he told Rural News.

"Someone once said to me, the reason we've got this land is because nobody else wanted to farm it.

"Remember a number of our farms are on the steep hill country that is six, seven and eight class country."

Leslie is happy with Pamū's general strategic direction and says there will be a continued focus on looking at emissions reduction. He says what is also important to the organisaton is the number of partnerships that have been developed with industry-good organisations, CRIs and fertiliser companies.

Leslie adds that Pamū will also continue to test and trial some new ideas and share this information with the wider farming community.

Leslie took up his new role with Pamū in March, having previously worked as the Silver Fern Farms and at Fonterra prior to that.

At Fonterra, his roles included being head of the operations and supply chain component of the brands business in New Zealand. He also previously had responsibility for the operation of the 94 ingredients plants across Fonterra's 27 sites, along with the associated milk collection activities.

Leslie was brought up on the family dairy farm at Reporoa in the central North Island. He holds a Bachelor of Agricultural Science and a MBA - both from Massey University.

Over the years, Leslie says he's always had a positive impression about Pamū and has had a close association in his two previous roles because Pamū supplied product to them.

At a personal level, he knows the Pamū farms at Wairakei Pastoral - which are fairly close to the Leslie family farm at Reporoa.