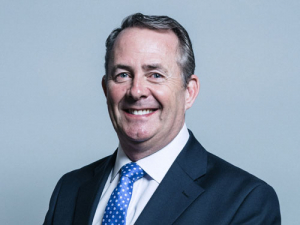 Agriculture Minister Damien O’Connor met briefly with Fox during his whistle-stop trip down under. He described as “useful and positive” the meeting with one of the people responsible in the UK for trade.

A major issue for NZ is how the UK and EU will work out how to deal with the present sheepmeat quota of 228,000 tonnes of lamb to the EU after Brexit.

The quota arrangements come under the jurisdiction of the World Trade Organisation (WTO) and there is a proposal on the table to see the quota split between the EU and the UK. NZ opposes this, wanting a flexible quota arrangement.

But O’Connor told Rural News that Fox gave no indication his government accepts the NZ position.

“That consideration wasn’t top of mind for the minister, but he clearly heard the message. Mr Fox obviously has other trade issues at the forefront.

“Splitting the quota will be difficult for us and will reduce the flexibility we now have.”

O’Connor says the UK ministers are focused on Brexit and their obligations to move that through smoothly. Some of the other trade issues seem secondary.

But they know they must get on and secure relationships with their trading partners.

“We are operating in a dynamic environment and must keep pushing our case when the opportunity arises to make progress.

“We must also realise that, despite the huge growth in the Asian market and China in particular, those markets in the UK and EU are still incredibly valuable.”

O’Connor says NZ has enduring, long term relationships that should be supported in a diplomatic and trade sense.