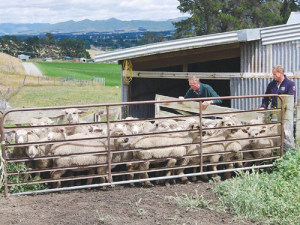 Ian, left, and Nick Hamilton prepare to load up a mob of spring lambs from their drought-hit family farm at Omihi, North Canterbury.

Some North Canterbury farmers are daring to hope the worst of the region’s record-breaking drought is over.

Omihi farmers Ian and Nick Hamilton are declaring the spring was “fantastic”. Like many in the region, they had completely destocked over the past winter, sending their animals away for grazing.

Their 400ha is now carrying 1500 ewes, 350 hoggets and 160 dairy heifers -- still about 500 stock units down on where they should be – after bringing back their sheep in mid-August and heifers in September.

On the day Rural News visited, the Hamiltons sent a truckload of lambs to the works, for the farm’s first income since April.

Sitting at Ian and Robyn Hamilton’s kitchen table with their son Nick, we looked out at a green, healthy paddock of lucerne. “That’s about the best strike of lucerne. Just about every seed’s grown, I reckon,” said Ian Hamilton.

However, the spring rain had been patchy. On one recent day they had recorded 2.5mm, while Amberley, about 15km to the south, had recorded 75mm. Inland Hawarden remained much drier.

The older Hamilton, who has lived in the area all his life, says this had been the “worst drought ever,” although they may be better off financially than after the bad drought in the 1980s, because of today’s lower interest rates and more resilient pasture plants.

He says many of the farm’s hilltops would take a few years to return to normal, but was he surprised at how well some pastures had recovered without the expected weeds. Clovers are back in abundance, he says.

But it has cost a lot of money to put some paddocks back into lucerne, and Nick Hamilton points out that most of their grazing bills had come in after the June 30 balance date, so there was still no chance of a profit this year.

The Hamiltons’ farm had become the poster farm for the drought when the Minister for Primary Industries, Nathan Guy, visited the area in June to announce that the “medium” drought classification was being extended to the end of the year, making it officially New Zealand’s longest-lasting.

On that occasion, Guy dug into the turf on a hilltop paddock to show that moisture from light rain extended only a couple of centimetres into the soil. Digging into the same paddock now, Ian shows that the ground is still dry under the top layer, but the rain has given them the confidence to have sown it in kale. Halfway down the hill, a small runoff-fed dam is noticeably fuller but still very low.

“We want a wet winter really to get back to normal,” says Ian.

Federated Farmers meat & fibre spokesman for North Canterbury, Dan Hodgen, says the spring rain has been “a pleasant reprieve” but North Canterbury still needs a lot more rain to bring things back to normal. Many farmers will not yet have been able to restock as the Hamiltons have.

“The hills are dry, but most people have a bit of feed in front of them,” he says. “We’re getting decent rain regularly, which is just keeping things going.”