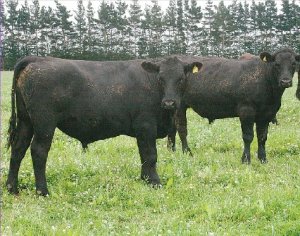 THE NEW Zealand dollar's strength is throwing a dampener on heady days for beef.

US export beef prices, and cattle futures, are at record highs as the drought in America has brought shortages around the world. And while the drought is over, there's still a lack of stock because of that, says Beef + Lamb New Zealand chairman Mike Petersen.

"We are strongly influenced by US dollar in farm gate returns and that is going to weigh a bit heavily on the farm gate price for farmers over next few months. I'm confident about the medium to long-term outlook for beef but the value of the dollar is impacting at the moment."

Prices have been coming back quickly. In the North Island, schedule prices have dropped to $4.30/kg from $4.90/kg only about three weeks ago, says Petersen.

But Meat Industry Association chairman Tim Ritchie says "there doesn't seem to be too many dark clouds on the horizon."

"Like sheep meat, supply and demand is in our favour. The New Zealand dollar is always the nasty one – we have seen that in sheep meat. In the last month or so it's moved about 8-9% and that impacts the farm gate prices."

Beef+Lamb executive director Rob Davison says the US market looks positive, with low cattle numbers and high prices. But North America represents about half our beef exports and 35% of export receipts. The position is not so clear with other markets.

Beef+Lamb's Washington representative Andrew Burtt says in his weekly report the US Department of Agriculture had released its estimates of cattle on feed (and sheep on hand) as at January 1, 2012. Both were down 2% nationally to the lowest level in 60 years for cattle.

There were marked differences by region, particularly because of the drought in the south-west.

"This trend is expected to result in cattle and beef prices continuing upwards," the report says.

But he says the US packing industry is suffering its most negative margins in many years as it pays higher prices for live cattle while continuing to struggle to extract higher prices at the wholesale level.

Reduced beef supplies – because exports have grown sharply in response to overseas demand – and the weakness of the USD, seem to have had little impact.

Burtt says National Beef Packing, the fourth-largest beef processor, reported a 73% drop in earnings in the last quarter of calendar 2011 due to beef sales prices being 16% higher while live cattle prices increased 21%.