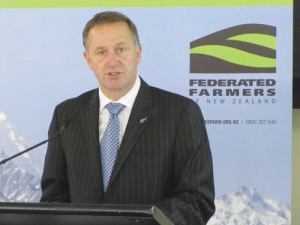 PM John Key claims he does not have political backing to change overseas land ownership rules.

The Overseas Investment Office needs more resources, but a reform of legislation is not on the cards because of lack of political support, Prime Minister John Key says.

"They are under-resourced in my opinion.... I don't think they are deliberately trying to do this, but the length of time it is taking to make a decision is far too long.

"The only applications going in are the ones where the legal advice is a very high probability of success. So when people say the office approves nearly everything put in front of it, that's true, but that's because it has already gone through a filter process.

"But nevertheless it is far too long.

"The Government's view is we should raise the costs and fees and the applicants seem happy with that and pour money into the offices which make the decisions."

Key said if you wanted him to change the Overseas Investment Act, which a lot of people would do, to at least have more clarity, "show me where I can get the [political] numbers from. Only ACT would support us." United Future, the Maori Party, Labour, New Zealand First and the Greens would not.

He also claims the decision two ministers made to turn down the Shanghai Pengxin bid for Lochinver, which they made without consulting others, was nothing to do with the politics.

The Government has said 'yes' to the OIO for a whole range of things such as Shanghai Maling buying into Silver Fern Farms "with a whole bunch of people jumping up and down", Bright buying into Synlait and Shanghai Pengxin buying into Crafar farms. He said all of them had a degree of pushback, but not a single one moved the polls.

"I think a lot of people jump up and down and make lots of noise but I don't think they moved our polls in any way so it is consistent with the Government's view that we are not going to get rich selling things to each other."

We will get wealthier and provide more jobs with two-way investment, he said.

"We are not saying 'no' because they are Chinese or American or anybody else.... We will say 'yes' or 'no' on the merits of the case, on the basis that any decision we make could be judicially reviewed both ways. But it is not about the public not liking it."

Investment by China into NZ and vice versa is extremely low, Key said. When approval was given to buy the Crafar farms all hell broke loose in the political sense. At that stage they went away and looked at it and there wasn't a single other farm registered to a Chinese owner in NZ.

"In fact, despite what people might want to argue, there hasn't been a massive investment in land in NZ from China. There has been a lot from Australia, US, Netherlands, some of the German pension farms and Scandinavia – but not from China.

"Two-way investment really matters and is the next step in bringing our relationship to the next level."