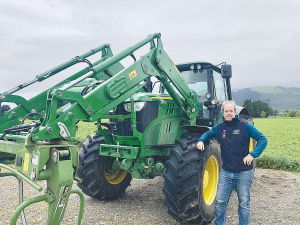 Golden Bay contractor Richard Houston drew from his own background to develop the new HanzonJobs app.

Richard Houston drew from his own background as a rural contractor in developing the free new HanzonJobs app.

He says contractors already do most of their own training, but until now had no way to structure and showcase the results.

Houston, who is based in Golden Bay, says he surveyed rural contractors as he was starting to develop the app last year.

"Every year they train new people. They value on the job learning as the highest form of learning," he explains.

"Now, instead of asking a potential employee what they can do, the employer can see what they have done."

He says rural contracting workers are a bit like trainee pilots who have to do a set number of hours, touchdowns and night flights before they get their qualifications.

The HanzonJobs app is not yet linked with any qualifications. However, it provides the sort of supporting evidence required with trainess able to record all the work they do by machinery type, terrain, weather conditions and tasks.

After spending most of the 2000s driving machinery in both hemispheres, Houston drew on his contacts and started helping find skilled seasonal machinery operators for the seasonal workload at either end of the planet. Pre-Covid saw him help 100-plus drivers each year migrate down to NZ to help with the work.

This business shrivelled as Covid took hold. Houston then turned his focus to something which has long been on his mind: how to best train Kiwis to operate often complex contracting machinery.

HanzonJobs was introduced in rapid fashion last year and he personally mentored the 70 trainees who effectively trialled the app. It records all the activities they do, producing a database with multiple benefits for trainee and employer alike.

RCNZ chief executive Andrew Olsen, who only took up the role in June, quickly realised the scale of the labour crisis the sector had and was looking for options.

He says some great work was done last year by RCNZ to develop and support training at places like Telford and Taratahi and with some training operators. However, these didn't have scale and didn't always link best with rural contractors.

"Our members favour on-job training by a country mile. We are a seasonal industry and need the right season/weather/conditions to provide the work necessary to learn these jobs."

Olsen saw the early results from HanzonJobs and was sufficiently impressed to ask his board to back it.

"The board is totally supportive," he says. "They are all contractors, all facing the same labour shortages and wanting to see our industry come through this."

Meanwhile, Houston says he's become very office-based these days but when he needs some fresh air - he goes back to his origins.

"I go and drive a maize drill of a silage chopper for office release, just fill in when required."

The local contractor, whose machinery he's driving, will appreciate that - given the crisis-level shortages of staff this season.