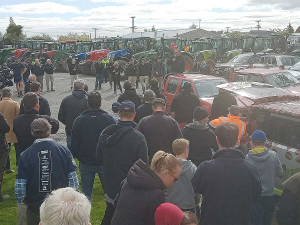 Hundreds of farmers, business people and others from the wider Southland community gathered in Gore and Invercargill earlier this month to express concerns about the impacts of the new freshwater regulations.

Hunt says Parker accused a local retailer in Southland, who spoke out against the regulations, of “catastrophising” the situation. But she says, in Southland, opposition to the new laws is not just coming from farmers but from the whole business community, who can see the economic disaster that is coming their ways with Parker’s new laws.

“For Parker to say that any opposition is ‘catastrophising’ the situation, shows that he was not connected very well to what goes on in Southland,” Hunt told Rural News.

“Retailers and businesspeople in Southland have time and time again seen what happens to the local economy when there is a dairy downturn. They know how it affects them and they take steps whenever they see one coming to protect themselves against it.

“This is just not a dairy downturn. This is every aspect of farming plus a huge hit on ratepayers as well that has yet to come.”

Hunt says nobody is questioning the need to improve water quality. However, she says this needs to be done over a sensible period of time so that the costs of changes don’t decimate the local economy in the process.

Her comments follow farmer and community protests in Gore and Invercargill against the new freshwater laws. In Gore, 100 tractors paraded through the streets of the town to a rally at the local A&P showgrounds where farmers were joined by the local mayor and other businesspeople to hear about the implications of the laws. Hunt says local people came out with placards supporting the farmers.

She says mayor Tracy Hicks told the rally that farmers were justified in their protest. Hunt says the regulations are not only a cost to farmers but to the whole community and Gore people recognise this.

“It almost had the feel of Christmas parade with all those in town supporting the convoy of tractors rather than being frustrated by it. The rally made a huge statement and there was not even a hint of any ‘redneck’ behaviour. I was proud of the way farmers conducted themselves,” Hunt says.

In Invercargill the next day, the turnout was larger with 500 people and 150 tractors crowded into the Queens Park area to hear a variety of speakers voice their concerns about the new regulations. Hunt says there was mix of farmers and high profile local businesspeople including the local chamber of commerce taking part.

Hunt says there was great camaraderie among all those at the protest.

“We set up a stage on a truck and there was panel discussion, which included a banker, a farmer, a real estate agent and a retailer. They gave their views on how these freshwater regulations will impact the broader economy of Southland – so we didn’t go into any of the specifics about the rules.

“It was much higher level and about the impact of the regulations on the various sectors in the community. After that, three representatives of catchment groups in Southland showcased some of the great things that farmers and community groups have already done to improve freshwater quality.”

Bernadette Hunt says after the main speakers the rally passed three resolutions that are to be passed on to government.

• Cultivating and planting will happen when conditions are appropriate

• Southland must balance a healthy economy and health freshwater

Hunt says there were two prongs to the protest. The first was to raise the profile of the problem of the regulations and to inform people about what these will mean for them. She says the other issue was a focus on mental health in the region.

“We had Laura Douglas from the Fairlight Foundation speak about this issue,” Hunt says. “She spoke about her story of resilience through change and uncertainty, and gave farmers and all those there, some positive messages to take home.”

Hunt says the mental health issues are not just confined to farmers, but to the whole community who are affected by pressure and uncertainty of the new regulations.