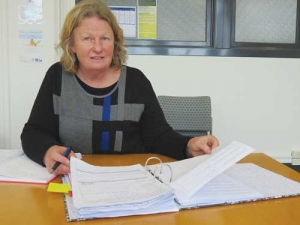 When Lyn Neeson, who farms near Taumaranui, saw the Whanganui and Ohura rivers rise rapidly in June, she figured this spelled trouble for farmers downstream and she was right.

Since July she has been working four days a week in Whanganui as the coordinator for the RST. She has the task of assessing the reports coming to her from farmers and people such as Harry Matthews and Brian Doughty who know the region and the farmers.

A major problem is damage to fences, she says.

“I know of one case involving three farms around the Paraparas where the floods wiped out the boundary fence between them. So they mustered all the ewes, vaccinated them and put them out on the hills.

“They are going to dock them all, put them back out and at weaning time the three farmers are going to go through and split the lambs three ways. Isn’t that a magnificent solution to a really big problem because there is no way they can fix the fences and keep the stock apart.

“In many cases the slips have gone through two fences, wiped out a track, and taken out a culvert and the next fence and then gone onto the road,” she says.

Neeson has farmed in the region for 20 years and has never seen damage to farms like this. The damage is scary, with slips making it hard for animals to get around farms and graze. Many farmers have quit stock because they don’t have the feed, but she notes that even trying to do this has been a mission, with many roads being impassable in the early days after the floods.

Taskforce Green people have also helped farmers with some of the clean-up work and farmers appreciate this.

Neeson’s role has been to direct help to the most needy farmers and gain sponsorship to help with some repair work and events. She has helped organise community events to bring farmers together to talk through issues and give them some respite from the hard slog of farm life.

With fencing being a major problem, Neeson found help from the brother-in-law of Hawkes Bay Feds president Will Foley.

“[The brother-in-law] is the president of the vineyard association in Hawkes Bay and they had 3000 secondhand posts so they rang me and asked ‘can you use them?’ So I organised Rabobank to pay for the transport and got a local transport company to drop them off at strategic places for farmers to pick up. The posts weren’t needed by the vineyards but they were great for our farmers who were grateful for them,” she says.

Neeson and the RST have worked hard looking after the welfare of farmers and their families. Special packs have been sent to schools to help teachers give advice to people who need help. She says because the floods hit during school holidays many children helped their parents clean up some of the mess.

“At the community events wives may walk in angry or frustrated because they have worked hard beside their husbands onfarm all day and are sick of being in the mud. Their husbands are getting grumpy because they are tired and any little thing you can give them makes them feel great. It doesn’t take much to make them feel better and that’s rewarding,” she says.

She doubts whether city folk have any idea of the stress and challenges many farmers in the Whanganui region are facing. Even government officials who come up from Wellington are staggered at the damage.

Keep connecting. That's the message to farmers from the chair of the Rural Support Trust, Neil Bateup.

A new initiative has been launched to provide up to $6000 worth of independent advice to farmers struggling with farm debt.

Flooding is affecting over 100 dairy farms in Southland and South Otago, says DairyNZ.