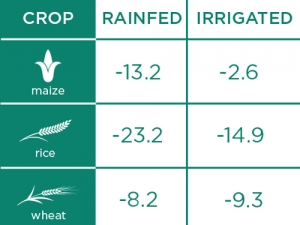 Effect of climate change on average maize, rice and wheat yields in 2050: Based on process-based models (DSSAT) between 2010 and 2050 (%). Source: IFPRI study

This year will likely be the hottest on record, according to the World Meteorological Organisation.

Depending on whether you are planning a beach holiday, or trying to keep your grass green, it could be a mixed blessing.

According to the International Food Policy Research Institute (IFPRI) rice, wheat and maize yields will fall significantly over the next 50 years without the aid of technology including crop protection and biotech traits to tackle climate change (see table).

Drastically reduced crop yields could have a devastating impact on global food security and that's where the plant science industry can help. Here are four technologies that are assisting farmers in many countries mitigate and adapt to climate change:

Heat-Tolerant Traits: The University of Florida has developed heat-tolerant biotech traits that showed yield increases of 38% in wheat, 23% in rice and 68% in maize grown in extreme and unexpected hot conditions.

Drought-Tolerance: For example the Water-Efficient Maize for Africa project is developing biotech traits that maintain and double maize yields in drought conditions.

While farmers worldwide will be challenged with climate change, smallholder farmers in developing countries could be hit the hardest – according to Agriculture for Impact, hunger and child malnutrition in Africa could increase by as much as 20% by 2050 as a result of climate change.

If the global community is to meet the United Nations' ambitious goal to end world hunger by 2030, while also facing up to the challenge of climate change, it will need these plant science tools at its disposal.

Give that man a Guinness – another world wheat record!

Going to liquid fertiliser is the big innovation that allowed Mid-Canterbury arable farmer Eric Watson to break his own Guinness World Record for wheat yield.