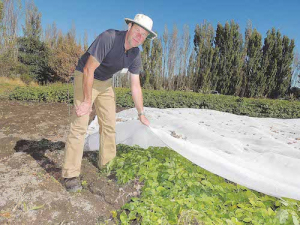 Dr Charles Merfield believes growing potatoes under mesh covers is the answer to many problems affecting the crop.

'The potato problem is solved' is the bold claim of a Canterbury researcher who believes the industry can be transformed by simply growing potatoes under finely perforated plastic mesh covers.

The mesh not only controls the latest major pest to hit potatoes – the tomato potato psyllid or TPP – but also helps against old scourges like aphids. Somewhat surprising to the researchers is that it also controls blight and greatly improves yield.

In March, Merfield announced interim results from several seasons of trialling the mesh on plots near Lincoln University. He is now trumpeting the worth of the system after collating the final results of the trials.

As Rural News went to press, Merfield was due to present his findings to the PotatoesNZ Conference, Pukekohe, on July 26, having announced them in a media release headed 'The potato psyllid problem is solved!'

Merfield said more research is still needed but he hoped that with the material he would put to the conference would engender interest from the industry to help fund the next steps.

The mesh system will effectively eliminate TPP and other pests, he said.

“We have the potential here to essentially have a potato production system that requires no insecticides at all and is as close to completely pest-free as it is possible to get and it has a better environment so you get better yield.

“If we can turn potatoes in NZ from a highly sprayed crop to one that at least doesn’t need any insecticide, and potentially one that doesn’t require any fungicide; if we can prove we can control both early and main blight with the mesh as well, then the benefit to the growers in increased profit, the benefit to the environment and the benefit to consumers, is all good news. We need to make this work rather than just sitting on our hands.”

Merfield said the final results of the trial include yield data, economic comparisons with chemical control and the final psyllid count.

Comparing agrichemical controls against three meshes with different hole sizes (0.7, 0.4 and 0.3 mm): agrichemicals had a total of 1614 TPP, while the meshes had four, five and three psyllids respectively, a result he calls “utterly stunning".

TPP has rapidly spread nationwide after arriving in 2006. A sap-sucking aphid-sized insect that looks like a tiny locust, TPP stunts the plant. It can also act as a vector for a bacterium known as liberibacter, which affects the tubers, making them mushy when boiled and discoloured when fried, and therefore commercially worthless.

Meanwhile, the mesh also controlled both early and main blight, contrary to early fears that it could encourage blight by increasing humidity. Merfield also recorded big improvements in yield, which he attributes to the plants being protected from mechanical damage caused by wind and weather.

“Total yield of mesh-grown potatoes increased by 10t/ha from 84.5t/ha for the agrichemicals to 94.5t/ha for the best mesh, a 12% increase. Almost unbelievably, the two best mesh yields exceeded the theoretical maximum yield of potatoes in Canterbury.”

However, Merfield said aphids are among the more difficult pests to control because of their unusual asexual reproduction and ability to produce “incredibly tiny” live offspring which get through the holes. “Aphids can breed so fast they make rabbits look like amateurs.”

Biological controls such as parasitic wasps and ladybirds could be used to mop up strays. With 20 years experience in biocontrols that would be a high-reliability system, he said.

OPINION: British supermarket chain Waitrose recently released its 2022 Food and Drink report, in which it predicts that potato 'milk' will be the biggest dairy alternative milk trend of 2022.