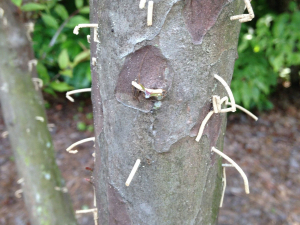 As the beetle tunnels, strands of boring dust, which look like toothpicks, extend from the tree.

The unwanted pest has been detected in five Auckland areas since 20 February.

The beetle is regarded as a serious pest overseas. It is known to feed on a wide range of broadleaf trees, including horticultural species such as avocado, and can spread fungal diseases.

“We need to know if New Zealand has a wider population, which is why we are asking the public to report any possible sightings.”

The beetle resides under bark, making it difficult to detect.

Gould says a tell-tale sign is distinctive protrusions of frass (compacted sawdust) from bark that look like toothpicks. They are caused by the beetles pushing frass out of tunnels bored into the trees. Other symptoms include sap oozing from the tunnel entrances and branch dieback.

He says officials are working with local authorities to identify the extent of the spread, including inspecting known host trees and placing lured traps around the detection sites.

Biosecurity NZ has also directed the removal of infested oak trees at one of the sites.

The beetle is native to tropical and subtropical East Asia. It has been found in many areas in the world, including Africa, USA, Central America, Europe, some Pacific Islands, and most recently in Queensland.

Anyone who believes they have seen the granulate ambrosia beetle or any sign of frass on trees should take a photo and call Biosecurity NZ’s exotic pests and diseases hotline on 0800 80 99 66.

Improving our readiness for Pierce’s Disease

Throughout northern California wine producers have dealt with Pierce’s Disease, caused by the bacterial pathogen Xylella fastidiosa, for over a century.