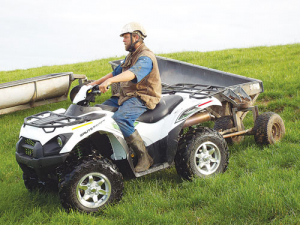 Over the last five years, FMG has settled claims exceeding $12.5 million, two-thirds of them accidents and 30% attributed to rollovers.

Over the last five years it has settled claims exceeding $12.5 million, two-thirds of them accidents and 30% attributed to rollovers.

FMG reports a seasonal bias towards rollover incidents during November to January, the time when mustering and spraying are all the go, particularly on beef and sheep farms.

At least 60% of rollover accidents occurred on hilly terrain, and 15% happened on wet or slippery ground.

Quads two years old or newer accounted for at least half of all rollover claims, despite only accounting for a quarter of the machines insured. (It would be interesting to explore deeper to see if there is any correlation between the engine size/power and weight of the machines, as it well known that the more powerful machines used for towing duties handle differently from lighter, less powerful machines.)

While quads are popular for their multi-tasking, it appears this offers more potential for mishaps. In fact, one in five (21%) accidents happened when the rider was also doing something besides riding the machine. A momentary lapse of concentration might mean an unexpected change going unnoticed – be it terrain, ruts, mounds or even small logs.

FMG says it is good practice to stop the machine before issuing commands to dogs during a muster, as the likelihood of doing it when moving means you are looking at the animals and not where you are going. The company also says it’s better to let stock to get away rather than take a quad into a situation where stability is compromised.

Interestingly, FMG said nearly 20% of quad accidents happened when the rider dismounted and the vehicle rolled away under its own weight because the park brake had not been set or was ineffective.

This typically happened when riders stopped to open or close gates, and when machines were left in gear with the engine running and the accelerator was inadvertently knocked.

“This is available for all farmers and growers via FMG’s website. Information in the guide comes from our own claims data and research, and includes advice on safer handling, better awareness when driving and how to reduce the risk of theft.”

A Kubota RTV-X1140, the highest horsepower RTV in its class, has been tried and tested by Taranaki farmer Kevin (Smiley) Barrett – who also happens to be the father of three well-known All Blacks.