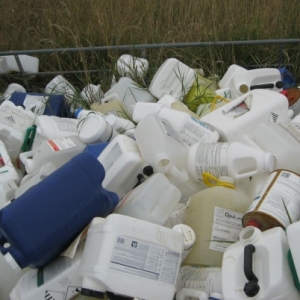 Major recycling opportunities exist for rural waste, according to a new report.

The report - commissioned by the Bay of Plenty and Waikato regional councils and presented this week to a multi-agency meeting in Hamilton - also highlights potential environmental challenges posed by current rural waste disposal methods.

According to the report, the average amount of waste generated by rural Bay of Plenty and Waikato properties means that major recycling opportunities could potentially be available.

The report, prepared by environmental consultants GHD, followed surveys of 69 properties which recorded 2564 tonnes of rural wastes, with an average of 37 tonnes generated per property annually. Those surveyed generally dealt with waste by either burying it, burning it or bulk storing it on site.

The waste ranged from various types of plastics, scrap metal, timber and fence posts through to the likes of glass, batteries, construction and demolition material, and domestic refuse.

If the average tonnages recorded are applied to the more than 14,000 farms in the two regions it could mean that more than half a million tonnes of rural waste is being disposed of on-farm annually. However, the report stressed it couldn't be assumed that all of these properties would be generating similar amounts of waste.

The report, which builds on similar work done by Environment Canterbury, is designed to feed into a wider project looking at the best way forward for managing rural waste nationally.

"Our report indicates both major opportunities and potential challenges for Bay of Plenty and Waikato when it comes to the way we deal with rural waste," said Waikato Regional Council's waste minimisation facilitator Marianna Tyler.

Nearly 80% of properties surveyed felt they could manage waste differently, while farmers were generally keen for more options. "There is an opportunity for better information and access to practical solutions to be developed in collaboration with the rural sector," the report noted.

Tyler emphasised that Waikato Regional Council is interested in working collaboratively with the rural sector and industry to identify practical, long-term solutions to the issues identified in the report.

Waikato Regional Council, Bay of Plenty Regional Council and Environment Canterbury are together considering next steps. Further work will be undertaken in the coming months following consultation with councils, industry and the Government.