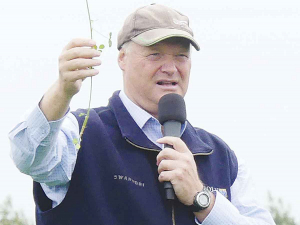 Lincoln University’s Professor Derek Moot is concerned at the lack of scientific evidence to back claims made about regenerative agriculture.

They have called on the minister to convene an expert panel of scientists to review all the claims made about practice.

“It is important that sound science drives our agricultural systems,” they say. “We believe such a panel should provide a robust critique of the claims made about ‘regenerative agriculture’ to ensure the public, industry and policy makers have a balanced and scientifically informed view of the ideas promulgated.”

Both Scott and Moot say regenerative agriculture has gained highly favourable publicity, but with no critical scientific evaluation. They believe this lack of critical evaluation is potentially damaging to the current world leading agricultural practices used by sheep and beef farmers in NZ.

“The underpinning scientific principles of our current agricultural systems are in danger of being devalued by a system that we believe has several serious short-comings,” writes the pair in their letter.

“We are particularly concerned that the erroneous publicity about ‘regenerative agriculture’ will divert the limited NZ agricultural science resources from more important, substantive issues.”

Scott and Moot claim that regenerative agriculture has become an all-embracing term to encompass the practices of any individual who does not want to be seen to be using conventional agricultural techniques.

“Importantly, this lack of definition, by default, implies that current conventional agriculture, as practiced in NZ, is degenerative.

“We strongly reject this implication. Our current sheep and beef farming practices are world leading. We recognise that there are practices and practitioners in conventional agriculture that can be improved, but

consider these are minor compared with most international production systems.”

The pair point to the fact that NZ’s sheep beef sector is the only industry to have reduced its greenhouse gas emissions intensity to below 1990s levels, while continuing to achieve strong productivity gains.

Scott and Moot say the emergence of regenerative agriculture has arisen from unsustainable farming practices in Australia and North America.

“However, this does not mean the practice is required, relevant or useful in the context of NZ’s climates, soils and agricultural systems.”

They also express concern by acceptance of regenerative agriculture by the Primary Sector Council (promoted by O’Connor) and the B+LNZ.

“We accept there is a strong lobby group behind this (regenerative ag) advocacy, in a similar manner to the organic community, the anti vax movement and anti-1080 lobby,” the letter says.

“However, we are convinced this system lacks credibility and contains many aspects that are scientifically untenable. We believe it is our statutory duty as academics to provide some warning about the fallibility of these systems.”

Scott and Moot believe a similar “wave of hype” around regenerative agriculture also happened with organics.

“Organic agriculture has been promoted since the 1980s to provide an ‘alternative’ production system for food,” their letter tells O’Connor.

However, the pair say organic’s promises have not been realised.

“In Europe, where it has been most strongly promoted, meta-analyses of production systems across a range of arable, horticultural and pastoral enterprises show an average 20% drop in production. As a result, only 6% of current European production is organic because

businesses cannot make a profit from this lowered production and increased labour input, even with heavy financial subsidies. This is why organic production has and will continue to be a cottage industry aimed at a local market in most countries.”

Scott and Moot believe that the emergence of regenerative agriculture is following a similar path to that of organics.