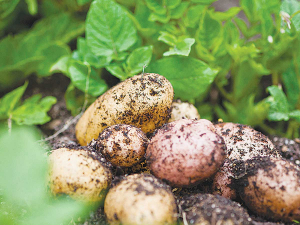 This is despite a Ministry of Business, Innovation and Employment (MBIE) interim report acknowledging the dumping of EU frozen fries in New Zealand, but claiming it's not threatening the local potato industry.

Potatoes New Zealand (PNZ) chief executive Chris Claridge told Rural News that a further submission would be made to MBIE in response to their interim report.

Claridge says PNZ want to ensure that imminent and future material threat is accounted for in the MBIE investigation.

"PNZ contest that the interim findings are not robust enough in terms of imminent and future material threat," he says.

MBIE launched an investigation in August last year after PNZ filed an anti-dumping claim, alleging that dumped frozen potato fries and wedges from Belgium and the Netherlands caused "a threat of material injury" to the domestic industry.

NZ potato growers charged that circumstances arising from the Covid-19 pandemic resulted in reduced demand for frozen potato products globally, with increased inventories in Belgium and the Netherlands.

As part of its investigation, MBIE contacted potato processing companies in Belgium and the Netherlands and asked them to fill our a survey.

That information, alongside Customs data, found there was a spike in imports from the two countries in June and July last year - and Dutch company, Lamb Weston, was in fact dumping product here. The MBIE report said dumping was likely to continue but concluded there was not a threat of material injury to the domestic industry as a result.

Accordingly, it was likely that advice to the minister responsible would be to terminate the investigation.

But Claridge says potato growers maintain and the evidence supports that there is dumping.

"PNZ industry and grower members are keen to keep fighting this and are concerned that it's not just the current situation, but how it's going to look in the next few years," says Claridge.

The MBIE report says evidence does not support this claim.

"The evidence does not support the claim by the New Zealand industry that government intervention in Belgium and the Netherlands has assisted potato growers so that producers of frozen potato products can take advantage of lower raw material costs, which means they can reduce prices for exports to New Zealand."

MBIE says based on this there are no grounds to determine that dumping of frozen fries is threatening to cause material injury to the New Zealand industry.

The New Zealand potato Industry remains a billion dollar plus industry, despite the challenges brought about in 2020.