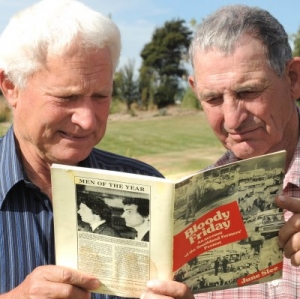 A reunion will be held on Saturday, June 8 at the Corinthian Conventions Centre at the Invercargill Workingmen's Club to mark the 35th anniversary of the Southland Farmers' Protest on the streets of Invercargill.

The reunion is open to all people with an interest in that historical event.

In what must be the most unusual demonstration New Zealand has witnessed, about 300 farmers released 1300-1400 starving old ewes into Dee Street on Friday, June 9, 1978, a day now known as "Bloody Friday". They drove them through the city to an out-of-the-way section in Victoria Ave and there, they slaughtered them humanely. The carcasses were taken to the abattoirs at West Plains and rendered down for fertiliser.

Repercussions from this day resonated into the following year and longer; particularly those directed at the two leaders of the demonstration – Syd Slee and Owen Buckingham, farmers from Blackmount and Te Anau respectively.

The purpose of the protest was to draw the country's attention to Southland farmers' total frustration over the state of their old sheep starving to death at a rate of 1000 a day because of industrial chaos across the meat industry, exacerbated by the effects of the worst drought experienced in many parts of the province since 1956.

During the first half of 1978 there were only nine days on which all four of the Southland freezing works were operating at the same time. In total, there had been 116 recorded stoppages in the first five months of 1978 resulting in Southland's kill being about 700,000 behind that of the previous season, with one million head of stock still waiting to be killed and the season due to finish.

The loss of wages to the freezing workers through these stoppages was estimated as being between two and a half to three million dollars and the loss to the community and the export trade was inestimable. Among the significant costs was the time and cartage taking stock back to the farms because there was no killing on that particular day.

In preparation for the reunion, the original account of the protest Bloody Friday: An account of the Southland Farmer's Protest (published in 1979) has been revised significantly by June Slee, the author of the original book. The new edition, Bloody Friday Revisited: Recollections of the 1978 Southland Farmers' Protest includes memories of the day and its protracted aftermath, gathered from farmers who took part in the protest as well as others who witnessed it from the streets.

A common observation of the men and women interviewed was that today's generation of young farmers would not believe what the immediate past generation of farming families went through and the toll it had on them, economically and emotionally. The reunion will be an opportunity for all people interested in this unique protest to get together and share their memories. If the memories have dimmed somewhat, the photos and DVD footage of the day should spark them up.

The book will be launched at the reunion by John Gordon, and further reminiscences of the day will be recorded for posterity. Profits from the book will go to the Southland Hospice. If people are interested in learning more about the protest, the book or going to the reunion, they should contact Syd Slee for a reunion registration form. (Phone: 03 2497085; email: This email address is being protected from spambots. You need JavaScript enabled to view it.)