Robotics nearly upon us 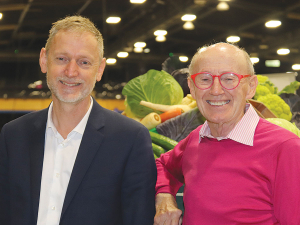 Robotics has moved out of the talking stage and into the early doing stages, says the chief executive of Plant and Food Research, David Hughes.

Together they gave a futuristic view of technologies and ideas the horticultural sector can expect.

David Hughes, a New Zealander, says in just the last year, various robotic companies in different countries had done field trials on different crops -- strawberries, raspberries, tomatoes, lettuces and asparagus. And there had been plenty to interest NZ in trials of robotic picking of apples and kiwifruit.

But picking by hand still remains cheaper, he says.

“But the cost of robotics is coming down sharply and you can see a point where those two lines will cross and robotics will be the cheaper option.”

Hughes says the widely held view is that technology will reduce labour costs. True, he says, but other benefits may reduce costs over a whole sector and so improve producers’ returns.

For example, while using robotics for loading containers onto ships saves money, the real gain is that robotics enables shipping companies to more precisely schedule their ships to avoid having them wait to be loaded.

“Absolute precision in loading schedules saves a lot more money than just the cost of labour. So in the horticultural industry, yes there will be labour benefits, but I think there will be lots of secondary benefits we can’t see,” he says.

Hughes says a big benefit of robotics and technology for  horticulture is its ability to gather and immediately act on information a human or handpicker cannot act on.

“If a robot is picking, it can be programmed to record and sort all the individual information about a single piece of fruit. This could be which bin it might go into, whether it be put on a vessel to go to Japan tomorrow because it is perfect for the Japanese market or whether it should be put into storage for six months and sold in another market.”

Hort systems must meet expections of the future

Plant & Food Research has just begun a major research programme focusing on designing horticultural growing systems to meet the expectations of society in the future.