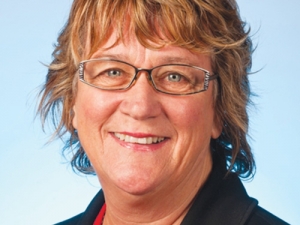 Webster represents the mainly rural area of Rodney which covers 46% of the Auckland geographic region. The Auckland Council is 70% rural.

"As someone said we are one of the biggest rural councils with a parking spot in the middle."

But at times it's frustrating getting understanding within the council of the rural viewpoint.

She recently had a phone call from a Waitoki lady who said the neighbour had dreadful fencing and his bull calves kept getting in the paddock with her heifers. She had been trying to get rid of them for over six weeks. She had phoned to get hold of the animal control department to say she needed someone to come and impound this stock. The lady was told to phone the Far North District Council as Auckland didn't have stock, it had only cats and dogs.

"It was the call centre with a young lady who doesn't know what she is talking about," Webster told Rural News. "Sometimes it is mind boggling; it's not their fault I know. But wouldn't you think [a call centre worker] would have a bit more of a clue about what the area is like?"

Webster says she has also had to sort out why it has taken three and a half months so far to get a resource consent to build a hay shed on a place near Te Hana.

Webster says she had the most extraordinary push to get the Ballance Farm Environment Awards to Auckland, which entered for the first time this year. The winners, Richard and Dianne Kidd, of Helensville, also won the national title. Webster and Franklin councillor Bill Cashmore pushed for Auckland to contest the awards.

"The staff came back and said 'no we will do our own'. I said 'no we won't, we've got existing environment awards'," she says.

On the night of the awards, the same staff said to her they never thought they would hear the words farming and environment spoken in the same breath. They thought it was extraordinary to hear people talking about fencing waterways, gullies and bush; they had not known farmers had been doing this for years.

Webster says she is lucky to have been around a long time and have experience and credibility. "You have to keep pushing all the time... and pointing out what life is like in the country."

She believes much education is needed as many people are so removed from the farming aspect of Auckland.

"There are still people who don't understand how big Auckland is. They think it finishes just north of Orewa; we go right up to Te Hana and beyond."

It is very difficult to get people to understand Rodney has nearly 700km of unsealed roads, she says. "That's not miles out in the middle of nowhere, it is quite near our townships."

Webster was on the former Rodney District Council before the amalgamation. She says it is not harder to get your voice heard in the super city, but you have to work differently to get understanding; and that can work both ways – with council and with ratepayers.

"People think they are worse off, but in many ways they are getting things that Rodney District Council would never have been able to afford," she says.

"But when you live on an unsealed road, and you've got hundreds of cars going past and you are living in a dustbowl it is very hard to look at money being spent in central Auckland. They say 'why isn't that coming out into our area?'."

"I keep on pointing out the differences between metro and rural Auckland and the different needs."