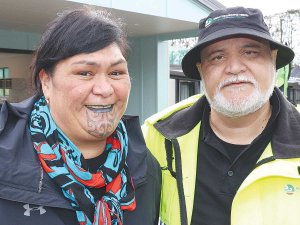 Minister of Maori Development Nanaia Mahuta and Ngai Tukairangi Trust chair Ratahi Cross at the official opening of the facility.

The opening took place during a field day at the Ngai Tukairangi Trust orchard, which is a finalist in this Ahuwhenua Trophy competition for the top Māori horticulturalist of the year.

Nanaia Mahuta says the new accommodation block is a great example of Māori setting the standard for hosting people who come and work on their land.

The complex, which cost just over $1 million, is on Ngai Tukairangi’s 57 hectare kiwifruit orchard at Matapihi – just a few kilometres away from Tauranga city. It consists of five accommodation units plus a modern kitchen, lounge and ablution block. It is located right beside the orchard and has outside tables and chairs for people to relax in.

Ratahi Cross, chair of Ngai Tukairangi, says the complex, which took about seven months to complete, is capable of holding 40 people. However, they have restricted the numbers to 26 to give people more space. He says they didn’t want to crowd people into accommodation and the aim is to give the workers as much space as possible.

“The minimum guidelines for such facilities are set by MBIE, but we have taken this up a notch and gone well beyond the minimum standards,” he told Rural News.

“We have also set up a computer in the lounge area and have provided free WIFI so the overseas workers can keep in contact with their families.”

Cross says by not filling the accommodation to capacity, it gives them flexibility to meet the needs of workers – such as ensuring that relatives can share the same room. He says it’s all about adhering to Māori values of communal living.

Cross says the cooperation’s overseas workers come from Vanuatu, the Solomon Islands and Tonga. The company also employ local people – with Māori making up the majority of its workforce.

Ngai Tukairangi is the largest Māori kiwifruit grower in NZ. As well as the 57 block at Matapihi in the Bay of Plenty, they also own a 60 hectare block of G3 Gold kiwifruit in Hawkes Bay.

The new accommodation block has been named Te Rau Mahara.

Cross says this links back to the famous WWII 28th Māori Battalion and to his grand uncle or Papa Turirangi Tekani, who was a member of the battalion.

During WWII Māori raised money to buy a truck, which was sent overseas and used to carry and distribute special delicacies, such as smoked fish to Māori soldiers. Cross says his folks were big financial contributors to the purchase of that truck.

“Te Rau was the name of the truck and Mahara means to remember,” he told Rural News. “We decided on this name because it recognises the efforts of the people from overseas we house in the complex who, in turn, produce the wonderful kiwifruit that we supply to the rest of the world.”