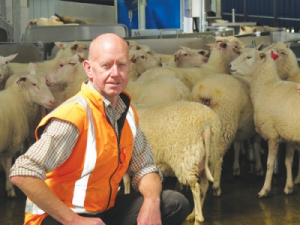 Milking sheep is much easier and simpler than cows, but it takes much more dedication and attention, says John Ryrie, sheep dairy manager at Spring Sheep Milk.

“You need good stockmanship to look after sheep,” he told Rural News.

A Scotsman, Ryrie has been in New Zealand for the past year as farm manager for Spring Sheep but has been sheep milking in the UK for 20 years.

“They are less forgiving than cows,” he says. “If you get the nutrition wrong for a few days then they won’t forgive you and give you the milk back. Once you get that nutrition wrong you lose that milk regardless of what you do afterwards, whereas cows are more forgiving.”

Sheep have a better memory than people realise, he says.

Ryrie says sheep are not as silly as people make out and have a very good long term memory.

“So if we come out of season and we dry them off and start up a new season, they will follow the routine we gave them the year before. Once we get them trained initially, it is easier and simpler for them to follow what we need to do.”

Ryrie thinks the potential for sheep milk is huge.

“I’ve travelled in Europe and I have travelled in Canada in the past and in the market the demand for sheep milk, as far as I can tell, exceeds supply by quite a factor worldwide.

“The main factor is to get the link between the consumer and production right, and I think NZ has that under control.

“In a lot of other countries they don’t have that link set up between demand and production.”

He says onfarm production needs to increase in NZ to make sheep milking viable and this comes down to genetics and nutrition: “they go hand in hand”.

“You can have good genetics, but if you don’t have good nutrition you won’t make the same gains.”