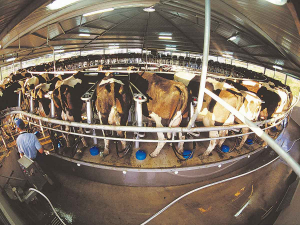 However, the 2.1% dip in North Island milk was offset by the South Island where full season collection was up 2.1%.

Full season collection for the North Island was 874.6 million kgMS and for the South Island, 642.5 million kgMS.

In its May global dairy update, Fonterra says milk production improved across the North Island in the last month of the season.

Fonterra’s collection in May was 69.9 million kgMS, up 2.1% on the same month last season thanks to heavy rain in some drought-stricken areas.

“May brought rain across the country, with some of the heavier falls across northern areas where it was very dry,” it says.

“North Island milk collection partially recovered in May relative to past months as weather conditions became more favourable and drought conditions eased, ending at 30 million kgMS, down 3.5% on last May.

“Following months of drought and lower milk production, May production improved on the back of more favourable weather conditions.”

South Island milk collection in May was 39.9 million kgMS, up 6.9% on last May, with good conditions through much of the month.

Forecast is forecasting 2020-21 milk collection to be around 1,525 million kgMS.

Milk production is also improving in Australia, jumping 6.4% in April.

Better seasonal conditions and improved farmer confidence contributed to the continuing production recovery in the second part of the season, especially in Victoria and Tasmania, Fonterra says.

Production for the 12 months to April was down 2.3% on the previous 12 months. However, Dairy Australia has moderated its outlook for 2019–20 production upwards, to a drop of just 1.3%.

But Fonterra is still struggling with milk supply in Australia.

Fonterra’s Australia collection in May was 7.7 million kgMS, a 5.3% decrease on May last year.

For the month, farm milk collection was up on last year, while third-party milk was down.

Season-to-date collection reached 100.9 million kgMS, down 12.4% on the same period last season. Fonterra says its milk collections have been impacted by the highly competitive milk supply market which has seen losses, primarily to milk brokers.

Fonterra Australia has also made a conscious decision to purchase less third-party milk to focus on a value-add product mix, the co-op says.