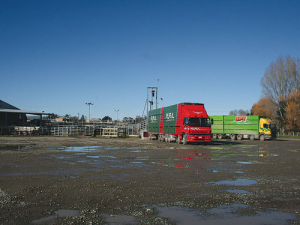 Additional biosecurity precautions are putting pressure on trucking costs, according to the RTF.

Farmers will not get stock moved if trucking companies do not get better freight rates, according to the Road Transport Forum (RTF).

“We’re at the point where people won’t get stock moved; something has to give here,” Ken Shirley, RTF chief executive told Rural News.

“All these additional biosecurity conditions and precautions we accept are necessary, but someone has to be prepared to pay for them and surely that’s the primary sector’s problem.”

Shirley says Mycoplasma bovis has brought matters to a head but the undercurrents have been “festering sores” for many years.

He says stock trucking is fiercely competitive, with prices constantly being driven down almost to the point of negative return on equity. “Many stock transport companies are in dire trouble.”

Farmers now insist trucks must be cleaned and sanitised before entering a farm but that can take several hours.

“Normally it might be done at the end of the day after many runs. But if you have to spend two or three hours between each run sanitising your truck that’s a huge cost and farmers don’t want to pay for it,” Shirley says.

Meanwhile, stock truckers have recently come under fire for dumping effluent alongside rural roads in Waikato, but Shirley believes farmers, meat companies and local authorities have all contributed to longstanding effluent management issues.

He says the stock trucking firms agreed 20 years ago to fit effluent tanks on all trucks. But farmers were also party to that, agreeing through Federated Farmers to stand their stock for four hours before trucking, to minimise effluent volumes; and councils said they would provide a network of disposal dumps.

Shirley points to “woeful disregard” of those agreements. “We end up carrying the can as an industry for the waste products of the primary industry, which of course aren’t generated by us.”

Each truck can carry about 45 cattle beasts, each producing 10L of effluent an hour.

“The same local bodies that are very tardy putting in the effluent dump sites then issue prosecutions under the Resource Management Act for the stock truck effluent. When the tank’s full it has to go somewhere.”

“On delivery the meat companies don’t let truckers dump effluent into the oxidation ponds at the meat works. And local councils are very reluctant to put in effluent ponds and all around the country there are inadequate numbers.

“When trucking companies put in their own effluent ponds to treat the waste of the primary sector they get pinged with all sorts of problems under the Resource Management Act and all the rest of it.”

It is a “point of real contention,” said Shirley.

“This needs sorting urgently because although Mycoplasma bovis is not transmitted, or is at very low risk of being transmitted, through effluent, many other serious diseases are.”

Shirley says the industry is also concerned about farmers’ low compliance with NAIT.

“Some pressure” to record stock movements was put on truckers when NAIT was being developed. The truckers were pleased that the legislation ended up putting the onus on the stock owners, but are now “very disappointed” at poor compliance.

“That of course has greatly heightened the incursion risk not only of Mycoplasma bovis but of other known diseases also,” Shirley says.